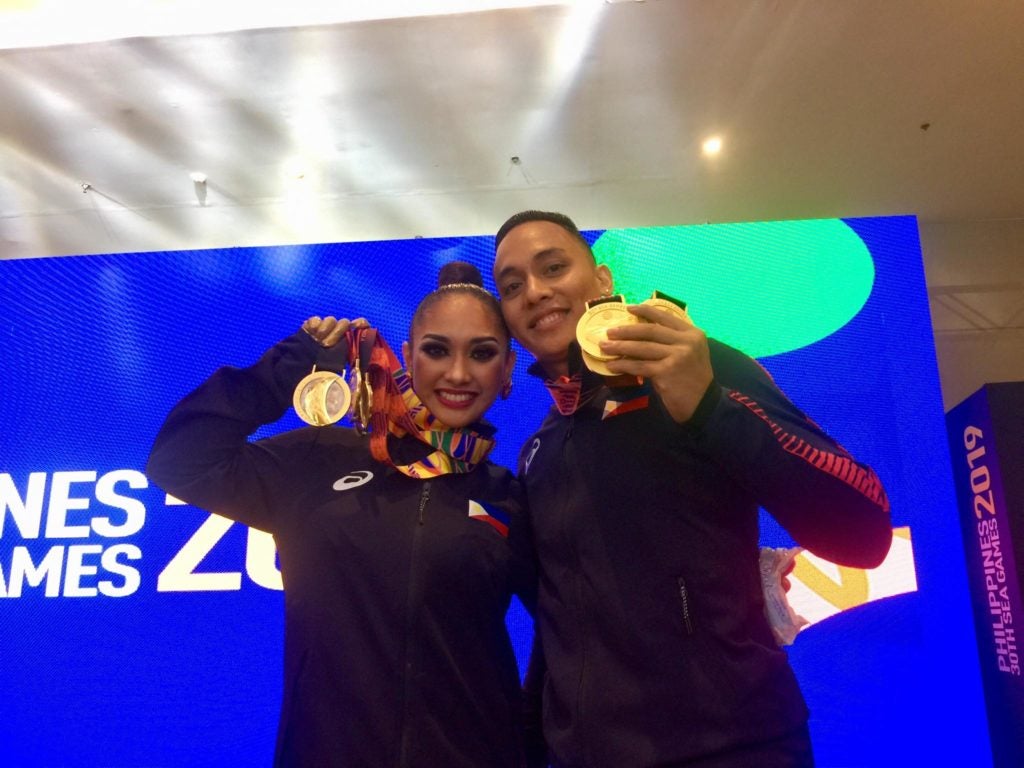 The triple gold medal haul of Cebu’s dancesport pair of Aunzo and Pearl Marie Cañeda in the ongoing 30th Southeast Asian Games (SEAG) is a result of a 21-year-old dancesport grassroots program.

Back in 2006, a 13-year-old Aunzo trooped with his friends to the gym of barangay Tejero in Cebu City because they heard that there was a training for dancesport as part of the Dancesport Team Cebu City (DTCC) grassroots program.

Little did he know that he and partner Cañeda will go on to become a nine-time national youth champion and clinch a youth title in the World Latin Championship in Australia.

If he hadn’t become a dancesport athlete, perhaps Aunzo would also have fallen into the same drug addiction trap that his older brothers had fallen into. Back then, he was an out-of-school youth and scavenged for food. Rice and salt were often his meals.

Then a year ago, Aunzo hit rock bottom. He suffered ACL and was ruled out of dancing for six to eight months. Grassroots came to Aunzo’s rescue for the second time.

A week after his operation to correct his ACL, he continued helping out with the grassroots program.

The DTCC grassroots program fueled by volunteerism was started by dancesport directors, Eleonor Hayco and Edward Hayco, because they wanted to give meaning to social dancing.

“We were social dancing when ballroom dancing was popular in 1994.

We evolved into competitive dancing in 1998, and started sharing our skills to kids who were interested through DepEd (Department of Education),” said Hayco.

Members of the team were tasked to teach what they had learned during the weekend trainings in the barangays.

“We continued to evolve in 2001 and started working with barangays and the Department of Education. Dancesport Team Cebu City hosted and organized the first Dancesport in Seagames in 2005. From that experience of hosting,  the team started to organize a national competition yearly since then,” he said.

With the success of the dancesport grassroots volunteerism program, Hayco applied the same formula when he became chairman of the Cebu City Sports Commission (CCSC) in 2010 giving birth to the CCSC summer grassroots program, the last edition of which gathered about 10,000 participants.

“Wilbert and Pearl are not just good athletes. They’re great athletes. Their role is to now inspire the underprivileged,  that poverty or lack of resources is never a hindrance to success. They are also one of our most dedicated volunteers,” said Hayco.

“This year was very amazing for us, very memorable. It has been a roller coaster ride,” said Aunzo.

Cañeda, who never left Aunzo’s side, said “Accomplished, very happy, overwhelmed because it is the first time that we raised the flag especially in front of Filipinos. We’ve always been the reserved couple.”/dbs

Read Next
Signal No. 2 up in northern Cebu; Metro Cebu still under Signal No. 1