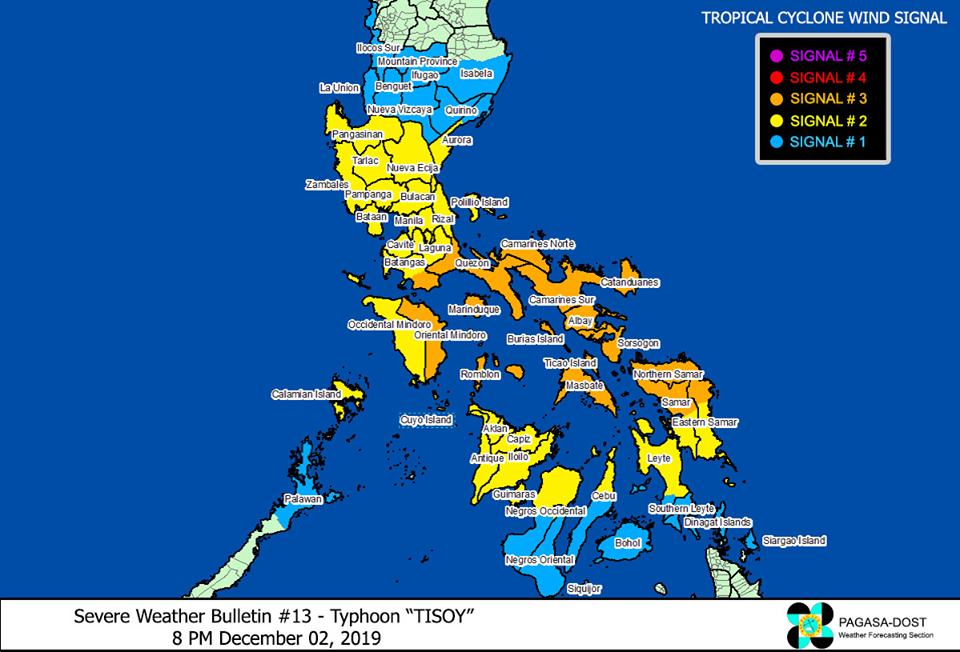 As of 8 p.m., storm warning signal no. 1 is already hoisted in Southern Cebu along with Metro Cebu while northern Cebu remains under Signal no. 2. (Source: Pagasa)

CEBU CITY, Philippines— The state weather bureau warns the public against possible flooding and landslides in high-risk areas due to the rainfall brought by Typhoon Tisoy.

The entire Cebu province is expected to experience the effects of Typhoon Tisoy in the following hours.

In the 8 p.m. bulletin, a Storm Warning Signal No. 1 is already hoisted over the towns in southern Cebu along with Metro Cebu. Northern Cebu, meanwhile, remains under Storm Signal No. 2.

As of 7 p.m., Typhoon Tisoy is estimated at about 90 kilometers east of Juban, Sorsogon, and it is expected to make landfall in the next three hours, Pagasa said.

It continues to move west at 20 kilometers per hour while maintaining the strength of 165 kph and gustiness of up to 230 kph.

Read more: Signal No. 2 up in northern Cebu; Metro Cebu still under Signal No. 1

The Cebu Provincial Disaster Risk Reduction and Management (PDRRM) Division is now under Red Alert status due to the typhoon.

“We are encouraging the local counterparts to already conduct a preemptive evacuation. We have activated the red alert status which means that they have already requested the help of other members of the [PDRRM] council,” PDRRM Officer Neil Angelo Sanchez.

Classes in the pre-school to high school levels remain suspended tomorrow, December 3, in the following towns under Storm Signal No. 2:

Class suspension up to the elementary levels is also effective in the following towns and cities:

In Cebu City, Mayor Edgar Labella also announced that classes from pre-school, elementary and high school, would be suspended on Tuesday, December 3, due to Typhoon Tisoy.

Meanwhile, Sanchez added that localities not included in the list may declare the suspension of classes based on their localized risk assessment.

Sanchez also cautioned fisherfolks against setting out to sea because of the risk brought by rough weather conditions.

Based on the data of the Philippine Coast Guard Central Visayas (PCGDCV), at least 325 individuals were stranded in Cebu and Bohol ports today, December 2, due to the cancellation of trips of 71 passenger vessels and 45 motorbancas.

The PCG has already deployed medical teams to their substations in the northern Cebu for prepositioning of their response units in case of sea emergencies./dbs