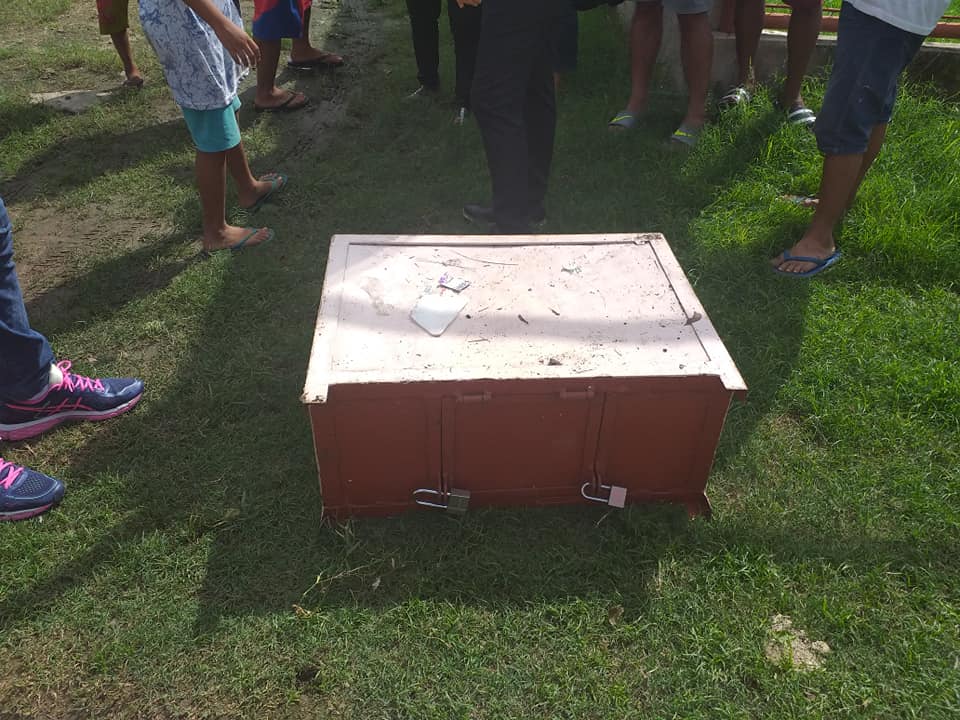 This is the”love offering box” which was stolen on Monda night, December 2. It was recovered at 2 p.m. on Tuesday, December 3, abandoned on a vacant lot located behind Daanbantayan town’s Regional Health Unit building. | Photo Courtesy of the Municipality of Daanbantayan Facebook page

CEBU CITY, Philippines — Police are checking the closed-circuit television (CCTV) system of all the establishments in Barangay Poblacion, Daanbantayan town to identify the two persons who broke inside Santa Rosa de Lima Parish and took out the “love offering box” on Monday night, December 2, 2019.

Police said no one saw the still unidentified persons. The northern part of Cebu, including Daanbantayan town, was placed under Storm Signal No. 2 on December 2, which made the residents stay indoors.

Authorities suspect that the culprits climbed up the fence and entered the church through the unlocked door.

The two persons reportedly came out after a few minutes and brought with them a big box, which was used as the repository for the churchgoers’ love offerings.

An estimated P7,000 was believed to be inside the box.

Authorities suspect that there are more than two persons who helped carry the box outside of the church because it was too heavy for two people to manage especially when they are under stress for committing a crime.

Patrolman Reyman Sitoy of Daanbantayan Police said it was the altar boy who discovered that the box was missing on Tuesday morning, December 3.

Sitoy said the altar boy entered the church to collect the donations but only to find out that the box was missing.

When the stolen box was reported Tuesday morning, a concerned citizen who lives near the Regional Health Unit (RHU) building reported that the box was discovered on a vacant lot with the locks still intact.

The unopened box still has the money inside it.

The money were placed inside white envelopes, which is a common practice for love offerings.

The box was immediately turned over to the police station. Police then called the parish priest to return the stolen box.

Police are still investigating the mysterious case of the unopened box to determine the culprits./ celr