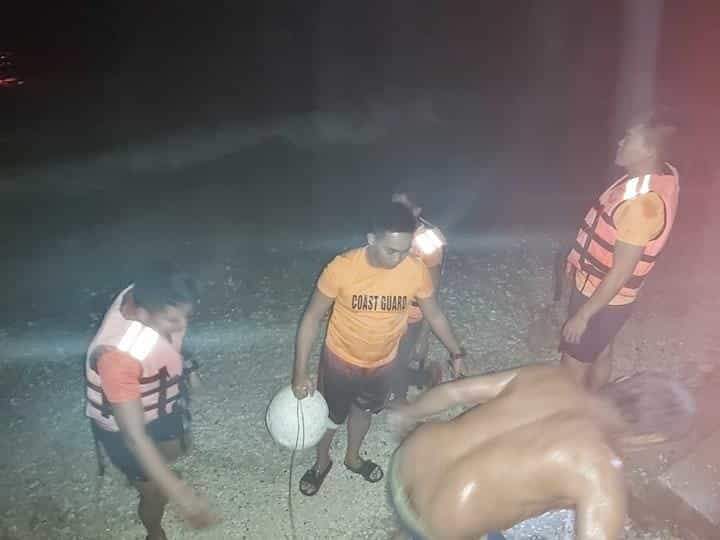 Personnel from the Philippine Coast Guard Southern Cebu Station rescued two fishermen whose motorbanca capsized off the waters of Barangay Poblacion in Oslob town past 7 p.m. on Friday, December 13, 2019. | Photo courtesy of PCG-7

Lieutenant Junior Grade Michael John Encina, PCG-7 spokesperson, said that Cecilio Espedillon, 50, and Benerando Vintec, 40, were on their way back to the shorelines of Barangay Poblacion in Oslob town that is located around 100 kilometers south of Cebu City when the accident happened.

Encina said that the two men left home on Friday morning to catch fish. They were already headed home when huge waves hit their motorbanca causing it to capsize.

They also lost their day’s catch.

Encina said that Espedillon and Vintec were travelling around 1.2 nautical miles or about 2.2 kilometers away from the shorelines of Barangay Poblacion when huge waves flipped over their motorbanca causing the two to fall into sea.

After they lost their motorbanca, the two fishermen decided to swim to the shorelines, Encina added.

PCG personnel fished the two men from seawaters and brought them to the Oslob District Hospital for medical checkup but they were later on sent home to their respective families after they were found to have been unharmed.

Coast Guard personnel also retrieved their motorbanca and brought this to their headquarters for safekeeping. / dcb

Read Next
Pilar Pilapil on beauty: ‘It can be a curse’