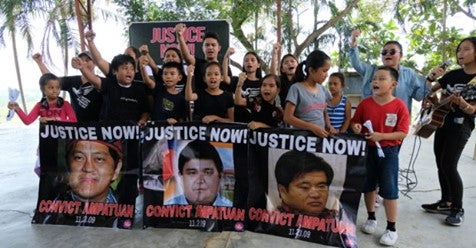 ILOILO CITY –– Iloilo journalists and church leaders on Wednesday held an ecumenical prayer assembly to pray and call for justice for the victims of the Ampatuan massacre on the eve of the promulgation of the 10-year case.

The assembly was held in front of the statue of Ilonggo journalist and patriot Dr. Graciano Lopez Jaena at the Jaro District public plaza and timed with the commemoration of his 163rd birth anniversary.

The Quezon City Regional Trial Court is scheduled to promulgate its decision on the Ampatuan massacre on Thursday.

Fifty-eight persons, including 32 media workers, were gunned down on November 23, 2009, in Ampatuan town in Maguindanao in what is considered the world’s worst single attack against journalists.

The massacre is also considered the country’s worst election-related violence.

Msgr. Meliton Oso, executive director of the Jaro Archdiocese Social Action Center, in his prayer appealed for justice amid the rash of those being killed “like chickens.”

“We wait for the judgment on the crime that happened 10 years ago. We ask, Lord, that they will be given justice,” Oso said.

“We pray that we will not close our eyes and be deaf to the injustice and the human rights violations happening around us and be brave like Graciano Lopez Jaena,” he said.

“We pray that justice will still reign even if delayed,” said Fr. Joevy Publico of the Iglesia Filipina Independiente.

Pastor Jec Dan Borlado of the Convention of Philippine Baptist Churches cited the essential role of journalists in reporting on the truth and the risks they are facing, including killings and other attacks./lzb