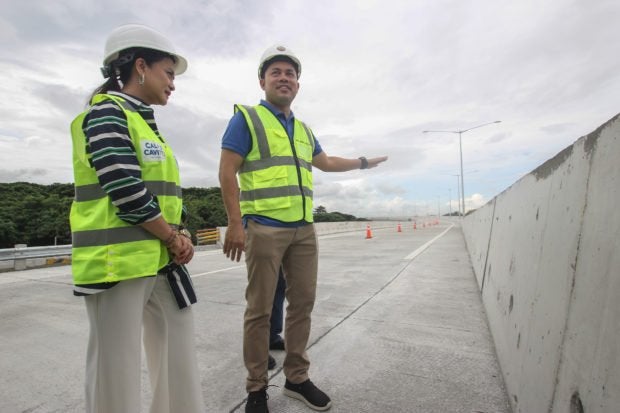 VITAL LINK Public Works Secretary Mark Villar (right) and Sta. Rosa City Mayor Arlene Arcillas on Oct. 30 led the opening of a 10-km section of the Cavite-Laguna Expressway, an important toll road that will link the provinces of Cavite and Laguna. –EARVIN PERIAS

Villar, during the partial opening of the Cavite-Laguna Expressway (CALAEx) here on Saturday (See related story on page B1), said the government was right on track in completing projects under “Build, Build, Build,” despite criticisms that it was a “dismal failure” with the “challenges” stemming from right of way acquisitions.

Expressways and bypass roads under the public-private partnership (PPP) program were identified as “big-ticket” and high-impact projects, all geared toward solving traffic gridlock in Metro Manila and adjacent provinces, Villar said.

On the Department of Public Works and Highways (DPWH) website, the PPP included six projects identified as either ongoing or under operation and maintenance, and 15 others up for feasibility study or evaluation.

One of the ongoing projects was the 45-kilometer CALAEx that would connect Laguna and Cavite provinces, under a 35-year concession with Metro Pacific Tollways Corp (MPTC).

A significant increase in traffic volume is expected once the

10-km section of CALAEx (Mamplasan, Biñan City to Sta.Rosa-Tagaytay Interchange) fully opens on Monday, in time for the Christmas and New Year holidays.

Since this section of the expressway opened on Oct.30, but operated only within limited hours, the MPTC had recorded an average of 3,000 users daily.

“The fact that there were many users, I’m sure it would help decongest [the roads], especially [in] Sta. Rosa City,” Villar said.

According to Villar, the DPWH is targeting to open next another 6 km of CALAEx with an exit leading to Silang, Cavite.

He said the PPP Task Force had acquired 40 percent of the government’s right of way, paving the way for road openings next year in Cavite, all the way to the Cavite Expressway in Kawit.

Police Capt. Julius Prima, officer in charge of the Libmanan police, said construction in the village of Beguito Viejo had caused a three-to four-hour delay in the past few days.

“Light vehicles from Metro Manila were asked to take the Sipocot-Libmanan route. Vehicles will pass through the town center of Sipocot and will reach Libmanan in 30 minutes,” Prima said.

Read Next
Priest’s message to parents: Spend quality time with your children