‘Oxymoronic’: Most injuries due to legal fireworks–DOH 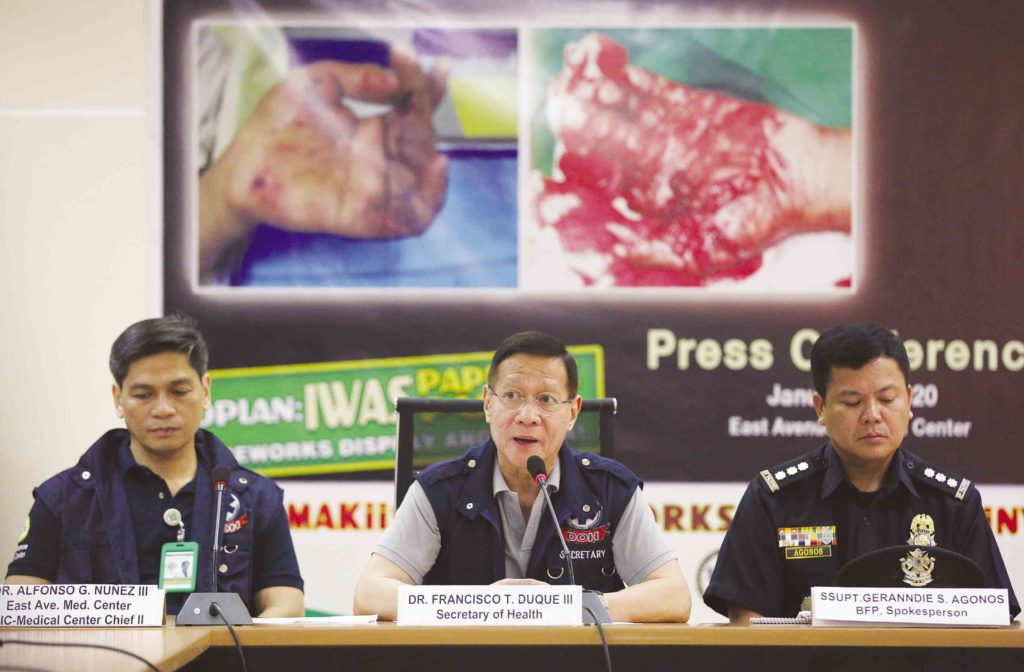 TOTAL BAN With gory photos of blast injuries as his backdrop, Health Secretary Francisco Duque III said the Department of Health still had not achieved its goal of zero fireworks casualty and wanted Congress to impose a total ban on firecrackers. He reported that 164 people were injured by firecrackers from Dec. 21, 2019, to Jan. 1, 2020, down from 251 during the same period a year ago. —NIÑO JESUS ORBETA

Health Secretary Francisco Duque III on Wednesday said the Department of Health (DOH) would propose a law that would impose an absolute ban on the use of firecrackers in the country, noting that majority of the injuries during the New Year revelries were due to legally sold fireworks.

“It’s a bit oxymoronic to say that it is legal but it is injurious. They are conflicting. So we need to do something about this,” Duque told reporters.

“In fact, it can contribute to higher injuries because of the understanding of the common person that since it’s legal, it wouldn’t cause problems,” he added.

Duque did not say when the DOH would submit its proposal to Congress but would hold public consultations on it.

This year’s cases are 35 percent lower than in the previous year and down 71 percent from the five-year average of 403 cases.

Still, Duque said that the DOH was far from achieving its goal of zero casualty. That is why he hopes that Congress would be receptive to their proposal to totally ban the use of firecrackers, he said.

“Nothing good comes out of it, no matter at what angle you look at it,” he said.

Duque acknowledged that enforcing a total ban wouldn’t be easy since there were certain economic considerations to make, such as providing alternative livelihood to people who would lose their jobs.

Metro Manila accounted for most of the cases (84), although it was 16 percent lower than last year’s figure.

Other regions with a high number of fireworks-related injuries were Calabarzon (13), Ilocos (12), Central Luzon (11), Cagayan Valley (10) and Western Visayas (10).

Duque said 59 percent of the injuries were due to the use of the top four firecrackers bought legally, namely kwitis (skyrocket), luces (sparklers), fountain and baby rocket.

Quezon City Police District (QCPD) chief Brig. Gen. Ronnie Montejo attributed the smaller number of injuries in the city to the “intensified campaign against illegal firecrackers and pyrotechnics as well as the establishment of ‘firecracker zones’” in many barangays.

To regulate the use of firecrackers and other pyrotechnics during New Year festivities, the Quezon City government and the QCPD had designated a total of 180 zones for fireworks.

Also on Wednesday, the Philippine National Police boasted that the Christmas and New Year celebrations had led to “zero death.”

“[The past year] probably goes down in history as the safest and most uneventful observance of the Christmas and New Year holidays that posted zero death,” said Police Brig. Gen. Bernard Banac, the PNP spokesperson.

“We are grateful that the people heeded our call to shun the age-old tradition of welcoming the new year with dangerous firecrackers and gunfire that has resulted in death and injuries in previous years,” he said.

The PNP recorded 324 holiday-related incidents involving firecrackers, stray bullets and illegal discharge of firearms since Dec. 16, 2019, less than half of the year-ago figure of 798.

The Region 1 DOH office reported that Kathleen Lauigan, 49, was wounded in the hip by a stray bullet in the Cagayan town of Iguig. She is out of danger.

Banac said 21 people, including one policeman and two soldiers and 14 civilians, one of them a Chinese national, were arrested for indiscriminate firing.

The Bureau of Fire Protection said no firecracker-related fire was recorded as the country ushered in the New Year. The number of fires before New Year’s Eve caused by firecrackers also dropped from 22 in 2018 to 13 in 2019.

Fireworks injured people of all ages, the youngest being a 1-year-old child in Cebu City and the oldest, a 72-year-old from Central Luzon. They also caused injuries of varying severities, from burns to amputations as in three cases in Central Luzon and one who lost a hand in Pangasinan.

Authorities have been enforcing restrictions on the use of firecrackers according to provisions of Executive Order No. 28 signed by President Duterte in 2017. The DOH has noted that the number of fireworks-related injuries had steadily drop since then.

The EO has muted the annual New Year’s Eve merrymaking at Barangay Pogo Grande in the bangus-producing city of Dagupan for two years now.

Pogo Grande, known for producing fireworks, used to ignite unsold firecrackers on Jan. 1 as part of their 20-year-old tradition.

“Maybe now, those who used firecrackers [at their homes] is less than 10 percent,” said former village chief Jojo Ramos, who initiated the tradition in 1994.

Most of the injuries were caused by an improvised cannon called boga, it said.

The cleanest injury record for 2019 went to Eastern Visayas where police said no one had been hurt since Dec. 21, 2019.

At Eastern Visayas Regional Medical Center in Tacloban City, no one was brought in due to a firecracker injury.

Cotabato City Mayor Cynthia Guiani-Sayadi strengthened her campaign iwas paputok, even personally going around the city during the Christmas and New Year revelries to make sure everybody complied with the firecracker ban.

In the Southern Luzon region, authorities recorded at least 82 injuries, fewer than in previous years.

They attributed this to the series of arrests and confiscation of illegal firecrackers days ahead of the New Year’s celebration and from intensified and widespread police public safety campaign during the holiday.

All Facebook pages of the different municipal police stations carried advisory posters and gory photos of firecracker victims to remind the public on the dangers of illegal firecrackers.