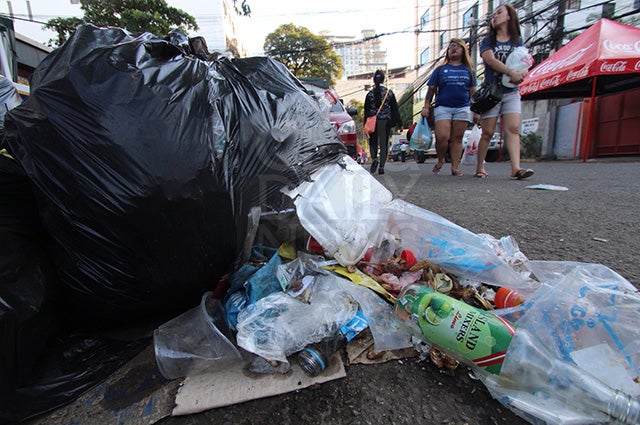 Garbage is seen along a street in Cebu City after the 2018 Sinulog festivities. | CDN file photo

CEBU CITY, Philippines–The Cebu City Department of Public Services (DPS) is asking bottled-water companies to provide recycling nets that the public can throw their used bottles into around the Sinulog route.

Biton said water bottles are the most common garbage collected by the DPS during the Sinulog since many of the pilgrims, tourists, and spectators bring or purchase bottled water during the Sinulog novena masses, solemn procession, and grand parade.

(We are asking the companies to place green nets so the bottles can easily be picked up.)

Aside from this measure, at least 600 DPS personnel will be assigned to the different Sinulog activities to ensure the cleanliness of the city during the events.

Biton said they already identified dispatch areas near the Sinulog routes where equipment will be placed so the DPS can sweep in and clean the area after every event.

Biton is also set to meet with barangay officials on January 7, 2020, to discuss augmentation of trucks from the barangays and deployment of barangay-assigned city aides to the Sinulog as well.

He said that the DPS needs more personnel to handle the expected big bulk of garbage after the Sinulog activities.

Vendors along or outside the Sinulog routes will also be required to clean their surrounding areas within a 5-meter radius.

Biton urged the vendors to cooperate in order to help the DPS ensure a clean Sinulog. /bmjo