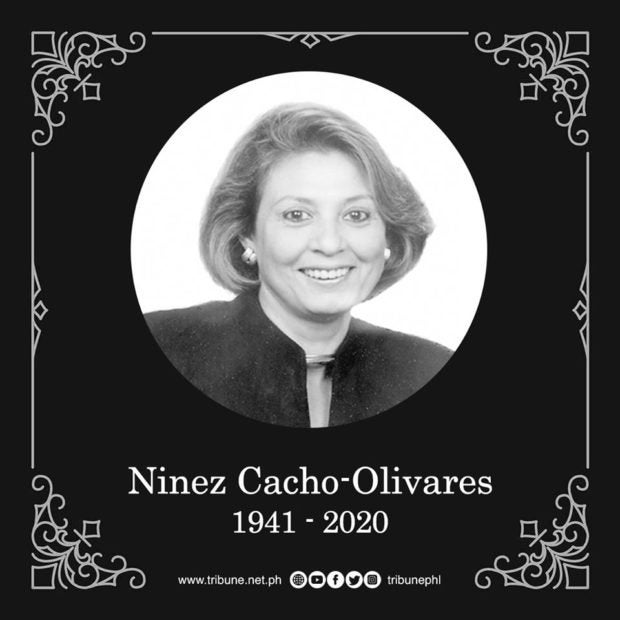 “We would like to extend our deepest condolences to the family of one of the country’s veteran journalists, Ms. Niñez Cacho-Olivares,” Communications Secretary Martin Andanar said in a statement.

The Daily Tribune, where Cacho-Olivares served as its editor in chief, said its founder died due to “lingering illness.” She was 78.

“Her strength in spirit and her strength in character was seen in how she pursued the continuance of her publication. Her fearlessness in sharing her socio-political opinions on public matters is something that her colleagues and friends will continue to remember and admire,” Andanar said.

“We are with her family in this time of grief. Her passing is a loss to the industry and to those who knew her personally,” he added.

In a separate statement Saturday, presidential spokesperson Salvador Panelo said “the Office of the President is deeply saddened” by Cacho-Oivares’ demise.

Panelo said “she was known for her biting commentaries and insightful analyses laced with wit and elegant sarcasm on government incompetence and corruption that provided probing and intellectual insights to her readers.”

“Ms. Olivares’ moving passion for reportage is legendary. Her debilitating illness could not stop her from putting The Daily Tribune to bed everyday,” he added.

Panelo hailed Olivares as “one of the leading figures who carried the torch for freedom of expression” during the martial law years.

The Palace official cited how Olivares “bravely joined the parliament of the streets against the Marcos presidency” and the “threat of arrest and detention could not deter her from pursuing her advocacy of freedom of the press and good government.”

“She was a shining example of a journalist who wrote with truth accompanying the movement of her pen. Her words came across as a scalpel that cuts the lies and corruption of political scoundrels,” he said.

“We have lost a welcome hell of a journalist that struck fear in the hearts of corrupt bureaucrats and politicians with pretended nationalism as well as pseudo-intellectuals who suffocate the air with their nonsense,” he added.

Aside from her column in The Daily Tribune, Olivares also wrote for several Manila broadsheets like the Philippine Daily Inquirer, Bulletin Today, Business Day, and Business World.

Read Next
Tala dance craze with a Sinulog twist