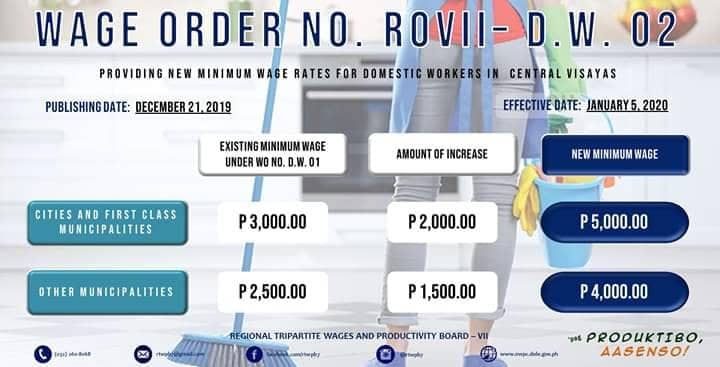 CEBU CITY, Philippines — Employers in Central Visayas have to implement the new wage rates that took effect on January 5.

Salome Siaton, regional director of the Department of Labor and Employment in Central Visayas, called on employers to implement the new wage rates.

The Regional Tripartite Wage and Productivity Board (RTWPB) had issued two wage orders.

One is for the minimum wage workers while the other order is for the domestic workers or kasambahay in the region.

On the other hand agricultural workers  and those working in establishments employing less than 10 workers will receive a minimum wage of P394 in Class A areas;  P361 in Class B areas; and P351 in Class C areas.

On the other hand, Wage  Order No. O2 requires employers to pay domestic workers or kasambahay employed in the Cities and First Class Municipalities P5,000 monthly from the previous P3,000 monthly pay.

Those working in other municipalities, should be paid not less than P4,000 monthly wage, up from from only P2,500.00.

Under the new wage order for domestic workers, employers are once again encouraged to comply with labor laws requirement of enrolling their kasambahay to SSS, Philhealth and PAG-IBIG as well as the workers in the non-agriculture and agricultural sectors.

Workers, who did not get to receive the required minimum wage, could proceed to DOLE and submit a request for assistance (RFA) so the department could take action, Siaton added. /dbs