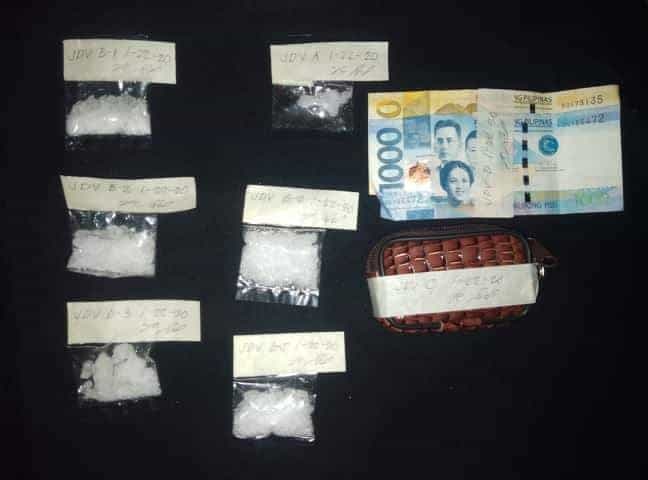 CEBU CITY, Philippines —Eight drug personalities including a high-value target were arrested by authorities in separate buy-bust operations starting at around 7 p.m. on Tuesday, January 21, 2020, to 2:40 a.m. on Wednesday, January 22.

The latest operation was conducted by the Carbon police station at around 2:40 dawn in Sitio Kastilaan, Barangay Ermita, here where suspect Junerie Velasquez, 33, from Upper Don Bosco, Barangay Apas, Cebu City was arrested.

Confiscated from Velasquez was 30 grams of suspected shabu (crystal myth) worth P240,000.

He said that based on their informant, most of Velasquez’s costumers were call center agents.

(But this is still subject for verification as it is also possible since he resides behind IT Park.)

According to Llamedo, the older brother of Velasquez was also arrested last November and it’s possible that the detained brother is the source of his illegal stuff.

Llamedo added that they placed Velasquez under surveillance for two weeks before the operation was conducted after several previously arrested drug personalities tagged him as their source of illegal drugs.

However, Velasquez according to Llamedo was not the first suspect they arrested in the dawn operation.

Florence Misa Branzuela, 36, from Sitio Don Bosco, Barangay Apas, was arrested first. She was found with two grams of shabu worth P13,600 during their 1:20 a.m. operation.

Llamedo said that Branzuela was the live-in partner of Velasquez’s brother.

Llamedo said that they are now preparing charges for violating sections 5 and 11 of Republic Act 9165 of the comprehensive dangerous drugs act against Branzuela and Velasquez.

The six were arrested by agents from the Philippine Drug Enforcement Agency in Central Visayas (PDEA-7) at around 7 p.m. in Sitio Buaran, Barangay Sawang Calero, Cebu City. /rcg