LeBron has triple-double, Lakers pull away to beat Nets 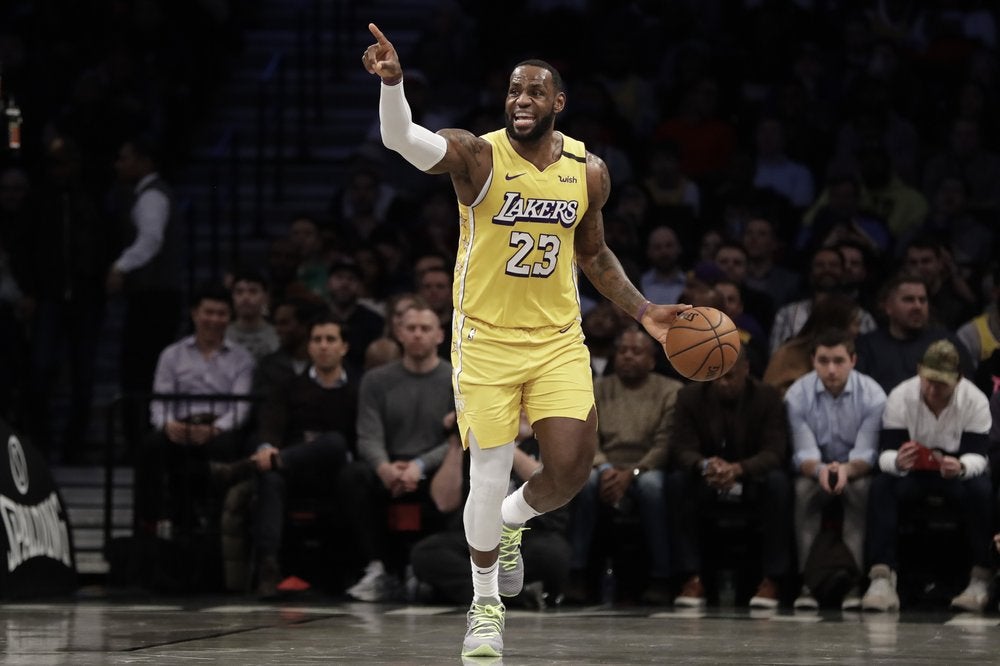 LeBron James of the LA Lakers brings up the ball in a game against the Brooklyn Nets. | AP photo

NEW YORK — LeBron James had 27 points, 12 rebounds and 10 assists in his 10th triple-double of the season and the Los Angeles Lakers made a season-high 19 3-pointers to pull away and beat the Brooklyn Nets, 128-113, on Thursday night (Friday morning, January 24, 2020, Philippine time).

James closed within 17 points of Kobe Bryant for third place on the NBA’s career scoring list with a flurry in the fourth quarter. He can pass Bryant on Saturday at Philadelphia, where the five-time champion with the Lakers was born.

A back-and-forth game for nearly three quarters turned into a rout after the Lakers broke the Nets’ spirits with four straight 3-pointers spanning the third and fourth quarters, extending a one-point lead to 107-94, and Los Angeles coasted from there.

Anthony Davis had 16 points and 11 rebounds, and Dwight Howard finished with 14 points and 12 boards in his first start of the season.

Kyrie Irving scored 20 points after missing a game with right hamstring tightness, but the Nets lost their fifth straight. Brooklyn has won just two of its last 14 games.

The Nets were without backup centers DeAndre Jordan and Nicolas Claxton, leaving them without many options behind starter Jarrett Allen. But they struggled just as badly guarding the perimeter. Los Angeles was 19 of 38 behind the arc.

The Lakers led 38-35 after one, before both teams made seven 3-pointers in the second. Howard went 4 for 4 for eight points in the period, helping the Lakers take a 75-70 lead to halftime.

Danny Green made three 3s in the first four minutes of the third, pushing the lead to 88-75, but the Nets had it down to 95-94 after a 3-pointer by Irving with 49 seconds remaining. But then Davis and Rajon Rondo hit 3s before Jared Dudley, who played in Brooklyn last season, hit one from near the Nets’ bench to beat the buzzer and make it 104-94.

Kentavious Caldwell-Pope made it four straight 3s to open the fourth, extending the lead back to 13. James then scored eight in the period before taking a seat for good.