Run for Kobe set on Sunday 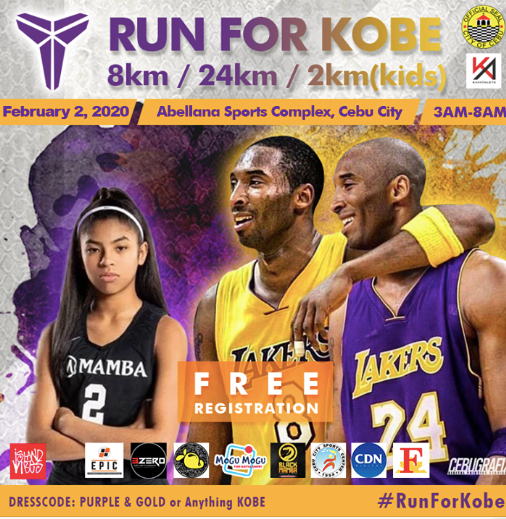 Fans of fallen NBA star Kobe Bryant are invited to register for the Run for Kobe, an event organized as a tribute to the iconic basketball player and his daughter. | Contributed Photo

CEBU CITY, Philippines – After six days of hectic planning and preparation, the “Run for Kobe” is finally official and will be held early on Sunday morning, February 2, 2020, with the start and finish set at the Cebu City Sports Center.

The run is a tribute for Kobe Bryant who is considered to be among the greatest basketball players of all time and a five-time NBA champion with the Los Angeles Lakers.

Bryant, 41, died in a helicopter crash in Southern California on Sunday, January 26, 2020,  (Monday dawn, January 27, 2020, Philippine time) along with his 13-year-old daughter, Gianna, who is better known as Gigi and seven others.

The tribute run for the fallen NBA star and his daughter will have three distance categories—24 kilometers, 8k and 2k.

The distances represent the jersey numbers used by Bryant while he was still playing with the Los Angeles Lakers, 8 and 24, and the jersey number of Gigi, No.2, who played with the Lady Mamba basketball team coached by her father.

Isaac Miko Masiglat, one of the organizers, assured that the run is “purely a tribute” and that they are not be making any profit from the death of Bryant who is a global basketball icon.

Among those who already signified their intention to run on Sunday includes PBA and Cebuano hotshot turned Cebu City Councilor Dondon Hontiveros.

The tribute run is organized by the Kayathletes headed by Ralph Mikhail Pestillos and is supported by the Cebu City government and Epic Performance and Fitness where Masiglat works as a trainer.

“We’re just helping him with this. And of course we believe in what Kobe stood for: fundamentals and work ethic,” said Pio Gerardo Solon, Epic owner and sports director of Southwestern University (SWU-Phinma).

Solon added that “I don’t consider myself a basketball fan. But, what impressed me the most with Kobe was his attention to detail, tenacity, and his work outside basketball – especially in business and philanthropy. Especially, also, as he recognised greatness in other sports and fields.”

Run for Kobe registration is free for all the categories but the organizers are asking those interested to join to follow certain steps in registering for the event.

Lastly, organizers are asking all participants to wear either purple, yellow, or gold, the colors of the LA Lakers with whom Bryant had played for in his entire 20-year NBA career. An option for the runners to wear any Bryant jersey.

Organizers will also be putting up an on-site registration but they urged those interested to sign up online, as it would be faster.

Although water and medical stations will litter the run routes, all participants are also advised to bring their own water bottles since organizers discourage the use of single plastic cups as they are aiming for zero waste after the run.

Runners in the 2k run will kick off from the CCSC and continue along Osmeña Boulevard towards the Capitol area and make a turnaround at the Shell gas station.

The 8k will follow the same route but will have runners going all the way up to the Capitol, turn right to Escario Street then left to Gorordo Avenue and make a turn around at the Lahug Elementary School while following the same route on their way back.

The 24k run will also follow the same route but runners will have to go further to JY Square where they will take a right to Salinas Drive, left to Governor Cuenco Avenue before going all the way to Barangay Talamban.  They will be making a turnaround at the crossing in Tintay and follow the same route on their way back to the sports center.

No winners will be declared during the event since this is a tribute run.  Organizers will not also be giving out singlets, finisher’s shirts and medals.