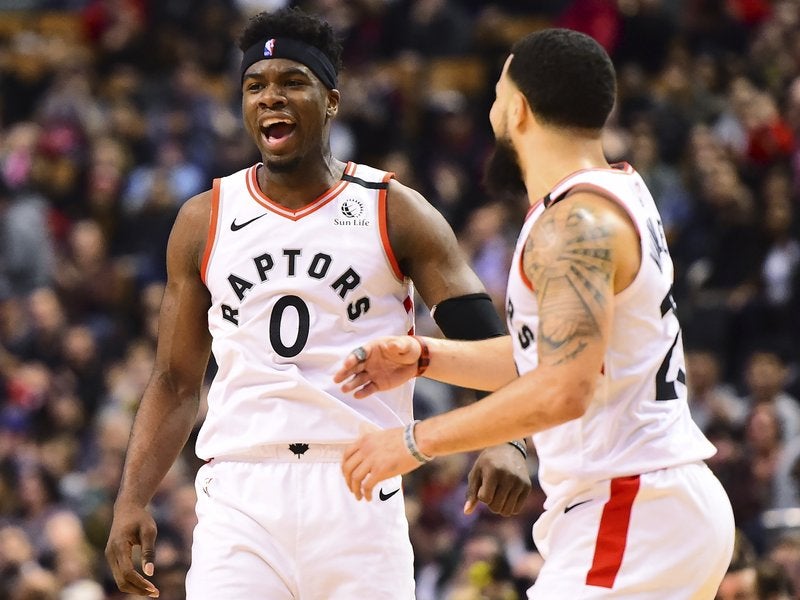 Pascal Siakam added 17 points, Serge Ibaka had 16, Chris Boucher 15 and Kyle Lowry 14 for the reigning NBA champions. The Raptors outscored the Bulls 69-39 in the second half to win their 12th consecutive meeting with Chicago.

Thaddeus Young fouled out with 21 points and Zach LaVine had 18 as the Bulls lost their third straight. Toronto swept Chicago for the third straight season.

Chandler Hutchison scored 17 points, and Ryan Arcidiacono and Coby White each had 12 for the Bulls, who are 8-18 on the road.

Davis made a career-high 12 of his 15 field goal attempts, including six of seven from 3-point range.

James Harden had 40 points and came an assist shy of a triple-double to lead the Houston Rockets to a win over the Pelicans.

Rookie sensation Zion Williamson had 21 points and 10 rebounds for the Pelicans, whose three-game winning streak was snapped.

Harden, who added 10 rebounds and nine assists, poured in 26 points in the first half and cooled down in the second half. But he still had his second straight game with 30 or more points after failing to score 30 in his previous four games as he worked through a shooting slump.

Jrue Holiday had three points before Josh Hart made one of two free throws to allow New Orleans to cut the lead to 110-107 with about two minutes to go.

Eric Gordon added a basket seconds after that and Danuel House hit a 3-pointer to make it 115-107 with less than a minute left to seal the victory.

Brandon Ingram had 28 points and 12 rebounds for New Orleans.

Giannis Antetokounmpo had 30 points and 19 rebounds, and the Bucks overcame Devin Booker’s 32 points to beat the Suns.

Antetokounmpo reached the 30-point mark for the 26th time and has had at least 10 rebounds in 23 of those games. He fell one assist shy of his fifth triple-double this season for the second straight game.

Fellow All-Star Khris Middleton had 25 points, eight rebounds and six assists, and Brook Lopez had 17 points. The Bucks shot 49.5% and made 15 of 38 from 3-point range.

DeAndre Ayton had 20 points and 14 rebounds for the Suns, who shot 39% and made just 6 of 23 from deep. Phoenix has lost five of seven games.

Andre Drummond had 21 points and 17 rebounds, and the Pistons rallied from an early 21-point deficit to beat the Nuggets, snapping their five-game losing streak.

Reggie Jackson added 20 points and Bruce Brown scored 19 for Detroit. Drummond put the Pistons ahead to stay with a dunk early in overtime, and Brown added a 3-pointer that made it 116-112.

Drummond fouled out with 2:43 left, but Detroit was able to hold on.

Nikola Jokic had 39 points, 11 assists and 10 rebounds for Denver. His 3-pointer with 29.4 seconds left made it 126-123, but Thon Maker answered with an alley-oop dunk at the other end to push the lead to five.

Read Next
Just got into a fight with your partner? Here are some quick fixes to get your relationship on track