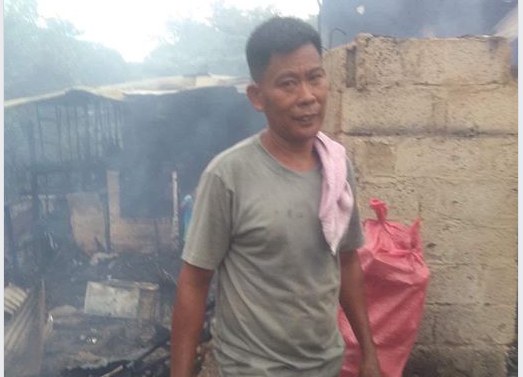 Kuya Ronnie, a maintenance worker in a Mandaue City private school, is among the victims of the fire in Barangay Tabok. Students of the school have started an online campaign to help Kuya Ronnie. | photo from Facebook page of Victoria Rodriguez

CEBU CITY, Philippines— Students from a known private school in Mandaue City have started an online drive to help a well-loved school maintenance worker who was among the victims of the fire that razed houses in Barangay Tabok last Monday, February 17, 2020.

Angeline Mayol, a grade 10 student of the said school, is one of the many students who shared an online post made by their class president, Victoria Rodriguez, asking for help for the maintenance worker known to them as Kuya Ronnie.

Mayol told CDN Digital that when they heard of the news about the fire and that one of the victims was their  Kuya Ronnie, they felt they could not just sit around and do nothing. So they took to Facebook their mission to help the maintenance worker, whom they describe as a very friendly person.

“Kuya Ronnie never forgets to greet us at all times. He is so cheerful and he always smiles even when [he is in a] difficult situation,” said Mayol.

The post was made a few hours after the fire broke out. And immediately made an impact as it has been shared 133 times since it was posted.

“Kuya Ronnie is the warmest, friendliest, and most cheerful person I met in school and I wish to repay him back in any way that I can,” part of Rodriguez post read.

As of Wednesday, February 19, 2020, Mayol says they have already gathered canned goods and used clothing from the school community.

(Anytime we can give all of these to Kuya Ronnie. But we know they need more, that’s why we still keep on posting.)

Those who want to help can message either Mayol (Mae Angeline) or Rodriguez (Victoria Cataros Rodriguez) on Facebook. /bmjo

Read Next
170 men from Carcar City jailed for illegal cockfighting