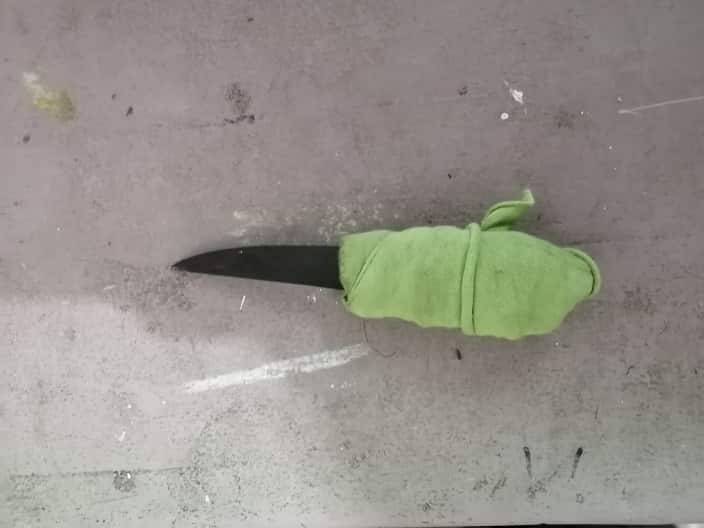 The knife used by the suspect Martin Fernandez, 26, of Sitio Libo, Barangay Mohon, Talisay City, Cebu, who stabbed his parents killing his father and wounding his mother. | Photo Courtesy of Patrolman Ariel Balde

CEBU CITY, Philippines — Parricide and frustrated parricide charges are being readied against a 26-year-old man, who stabbed dead his 57-year-old father and wounded his 49-year-old mother at dawn of February 23, 2020 in Talisay City.

Patrolman Ariel Balde, case investigator of the Talisay City Police Station, said that they were preparing the case against Martin Fernandez for killing his father, Juanito Ferrocho, and wounding his mother, Jen Fernandez at 3 a.m. today in Sitio Libo, Barangay Mohon.

Balde said that they planned to file the complaint at the Prosecutor’s office on Monday, February 24, 2020.

According to the investigation, Martin, who lives with his parents, got angry after the parents Jen and Juanito, did not allow him to go out of their house at that time.

Martin, who had no job, lost his cool after the parents told him to stay inside the house.

He allegedly went to the kitchen and got a knife and returned to the room his parents were sleeping and attacked them with the knife.

Balde said that Juanito was stabbed several times in the body, which caused his death, while Jen, who survived the attack, was in serious condition and admitted at the hospital.

Doctors later told police that her condition had remained stable at the hospital.

After the attack, Martin went out of the house and hid in a grassy area near their house, where police later found him.

Balde said that they responded to the call for help from neighbors, who heard about the commotion at Fernandez and Ferrocho’s house.

Jen and Ferrocho are a common law couple and Martin was their son.

When police arrived they found the bloodied parents and rushed them to the hospital.

Juanito was declared dead on arrival by the attending physician while Jen was admitted at the hospital for the stab wounds in her body.

Some of the policemen, who stayed behind later found Martin at the grassy area near their home and arrested him.

When asked why he attacked his parents, Balde said that Martin allegedly told arresting policemen that his parents were evil and that was why he allegedly attacked them.

Balde said that Martin was not high in drugs and was found to have not been under the influence of liquor.

He said that they were further investigating if the assailant had mental health issues.

For now, Martin Fernandez was detained at the Talisay Police Station detention cell pending the filing of charges./dbs

Read Next
Another body found in Manipis; cops to public: Help us identify body