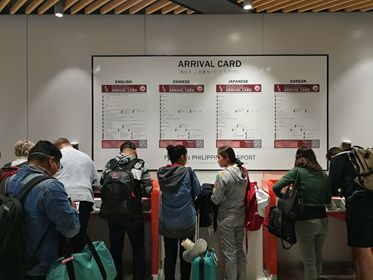 CEBU CITY, Philippines – Health officers in Central Visayas are now tracing 26 South Koreans who arrived at the Mactan Cebu International Airport in the evening of February 25  from Daegu, the epicenter of the Coronavirus Disease 2019 (COVID-19) outbreak in South Korea.

Dr. Terence Anthony Bermejo, chief of the Bureau of Quarantine in Central Visayas (BOQ-7), said these foreigners are now categorized as Persons Under Monitoring (PUMs) after the Philippine government imposed a travel ban on North Gyeongsang province today, February 26.

Daegu City is a city of North Gyeongsang province.

Bermejo said they are now gathering the health declaration forms of these passengers who boarded a four-hour direct flight from Daegu to Mactan Cebu International Airport (MCIA).

“We will be tracing them, contacting them, and determining their whereabouts. Once we can locate them, they will be advised to stay in their respective accommodations, and will be subject for close monitoring,” said Bermejo.

But in the event that these South Koreans show any sign or symptom of the disease, Dr. Jaime Bernadas, director of the Department of Health in Central Visayas (DOH – 7), said they will be directly admitted to hospitals.

“If they are found out to be symptomatic, then they will be classified as Patients Under Investigation (PUIs), and should be admitted to the hospitals,” said Bernadas.

“Unless they are cleared and tested negative of the virus, then they are not allowed to return to their country of origin – in this case, South Korea,” he added.

Bermejo and Bernadas met with Cebu Governor Gwendolyn Garcia this afternoon, February 26, where they agreed to include travellers coming from North Gyeongsang province in South Korea to undergo the mandatory 14-day quarantine.

Garcia said the same quarantine protocols imposed on travelers from China will be applied. This includes subjecting Cebuano residents under home quarantine while non-Cebu residents will be referred to their respective home provinces.

There are at least 22 direct flights per week between Cebu and Daegu.

Bermejo, however, said they received advisory from airline companies operating Daegu-Cebu-Daegu routes that flights have already been cancelled as of today, February 26.

The travel ban is still limited to one province in South Korea. However, Filipinos are now barred from traveling to the entire Korean country where over 1,261 patients are infected with COVID-19.

Garcia also said they are studying the possibility of expanding the quarantine protocols for inbound passengers from the whole of South Korea but they will depend on the directives from the Inter-Agency Task Force on Emerging Infectious Disease (IAFT-EID)./elb