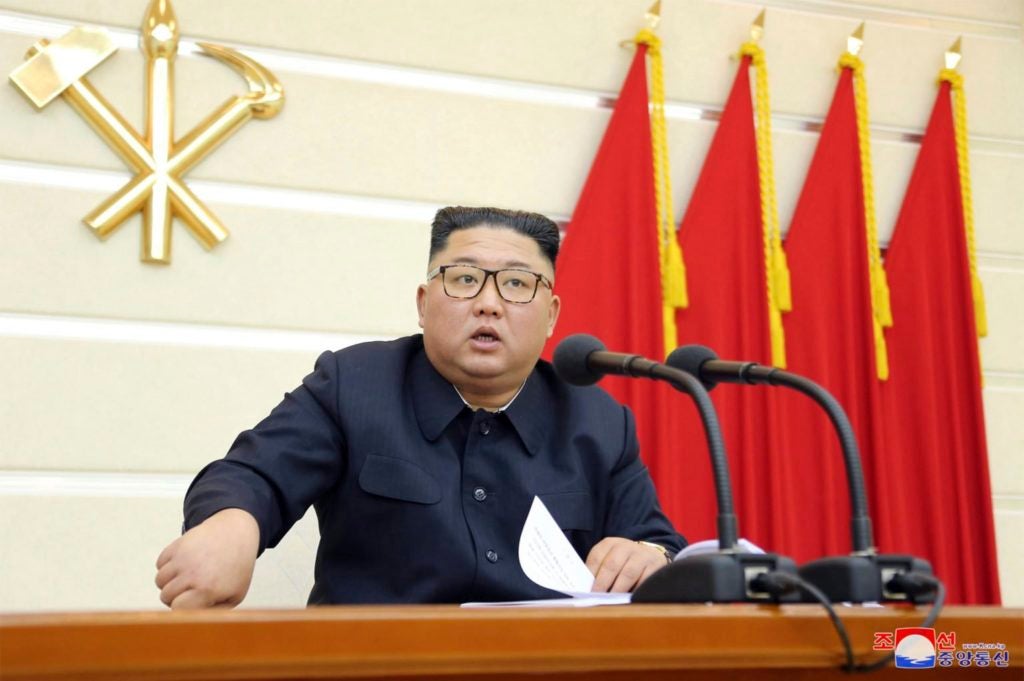 In this undated photo provided Saturday, Feb. 29, 2020, by the North Korean government, North Korean leader Kim Jong Un speaks during a ruling Workers’ Party’s meeting in North Korea. North Korean leader Kim has called for stronger anti-virus efforts to guard against COVID-19, saying there will be “serious consequences” if the illness spreads to the country. Independent journalists were not given access to cover the event depicted in this image distributed by the North Korean government. The content of this image is as provided and cannot be independently verified. Korean language watermark on image as provided by source reads: “KCNA” which is the abbreviation for Korean Central News Agency. (Korean Central News Agency/Korea News Service via AP)

The impoverished nation, with a weak and ill-equipped healthcare system, has closed its borders to prevent the spread of the disease into its territory.

Kim told a meeting of the ruling Workers’ Party of Korea that the fight against the virus was a “crucial state affair for the defense of the people” that required maximum discipline, according to the official Korean Central News Agency (KCNA).

“In case the infectious disease spreading beyond control finds its way into our country, it will entail serious consequences,” KCNA quoted Kim as saying.

Two senior officials — party vice-chairmen Ri Man Gon and Pak Thae Dok — were sacked, and a party unit disbanded for corruption, the report said, indicating that they may have been involved in graft linked with the anti-epidemic measures.

“No special cases must be allowed,” he added, and ordered officials to “seal off all the channels and space through which the infectious disease may find its way”.

Pyongyang has not reported a single case of COVID-19, which has killed more than 2,800 people and infected over 84,000 people in dozens of countries since it emerged in neighboring China.

North Korea has banned tourists, suspended international trains and flights and placed hundreds of foreigners in quarantine to prevent an outbreak. It has also reportedly postponed the new school term.

South Korea, meanwhile, is battling a major outbreak of the virus with more than 2,300 cases — the highest number outside mainland China.

Germany’s ambassador to the United Nations has said the Security Council would adopt humanitarian exemptions to the sanctions imposed on Pyongyang over its weapons programs, and allow the export of equipment to help North Korea fight the coronavirus.

But “the problem is that right now the North Koreans closed the borders,” Christoph Heusgen said Thursday after a closed-door Security Council meeting about the reclusive state.

The members of the Security Council called on North Korea “to allow this equipment in. So the population can be protected,” he added, without elaborating on the type of equipment.

Read Next
Travelers warned: False info can land you in jail