ROME  — The boisterous hum of Rome dwindled to a whisper and police patrols kept people apart in cafes as Italy enforced an extraordinary, sweeping lockdown Tuesday in hopes of not becoming the next epicenter of the spreading coronavirus epidemic now that life in China is edging back to normal. 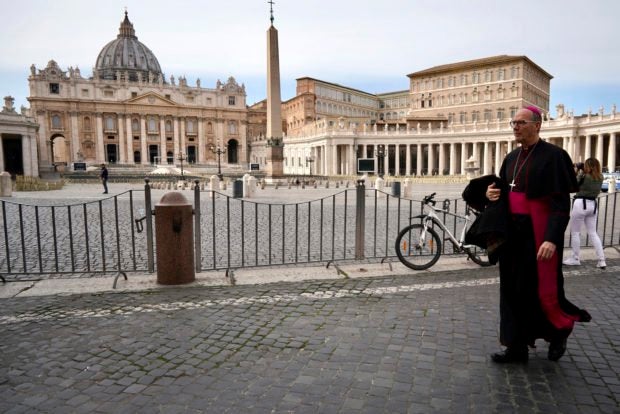 A prelate walks outside St. Peter’s Square after the Vatican erected a new barricade at the edge of the square, in Rome, Tuesday, March 10, 2020. Italy entered its first day under a nationwide lockdown after a government decree extended restrictions on movement from the hard-hit north to the rest of the country to prevent the spreading of coronavirus. (AP Photo/Andrew Medichini)

Infections in Italy topped the 10,000 mark with 10,149 cases — more than anywhere else but China — and the number of deaths from the virus rose to 631, from 463 a day earlier, Italian Civil Protection authorities said.

Travel and social restrictions that were extended across Italy illustrated how the virus and the broad disruptions it is causing are sweeping westward from China, where the outbreak began.

Police across the country patrolled cafes to make sure owners kept customers 1 meter (3 feet) apart during daylight hours and then enforced a strict 6 p.m. closure order.

“It’s bad. People are terrorized,” said Massimo Leonardo, who runs a market stall. “I’ve never seen anything like it.”

For most, the coronavirus causes only mild or moderate symptoms, such as fever and cough. But for a few, especially older adults and people with existing health problems, it can cause more severe illnesses, including pneumonia. More than 116,000 people have been infected worldwide and over 4,000 have died.

By encouraging many of Italy’s 62 million people to stay home and further drying up what was left of the country’s already battered tourism industry, the lockdown could increase the likelihood of a recession, dealing another blow to reeling global markets.

Italy’s economy, the third-largest of the 19 countries that use the euro currency, relies heavily on industries requiring the physical presence and proximity of workers: tourism, manufacturing, and retail.

Italians shouldn’t leave home unless for work, health care or “necessities” such as grocery shopping, the premier’s office said.

Shops cafes and restaurants were ordered to close at 6 p.m., a seismic restriction in a country that prizes its gastronomy, luxuries and cafe culture.

Giorgio Armani announced the closure of his hotel, restaurant and boutiques in Milan, citing ”preventative measures adopted so far to safeguard the health of the employees and customers.”

“I’ll do whatever they tell me to do,” Rome florist Stefano Fulvi said. “If I have to close, I’ll close.””

Italy also found itself increasingly sealed off as other countries sought to keep infections contained.

Malta and Spain announced a ban on air traffic from Italy. British Airways and Air Canada suspended all Italy flights. Austria barred travelers from crossing the border without a medical certificate, Slovenia closed its border with Italy and Albania banned Italy air and ferry traffic. Britain, Ireland, Hong Kong and Germany strengthened travel advisories urged their citizens to leave. Even the Vatican erected a new barricade at the edge of St. Peter’s Square.

“Get out of northern Italy if you’re there,” said Erik Broegger Rasmussen, head of consular services for Denmark’s foreign ministry.

But in China, the diminishing threat prompted President Xi Jinping to visit the central city of Wuhan, the epicenter of its outbreak, on Tuesday and declare: “We will certainly defeat this epidemic.”

It was the latest sign that China is edging back toward normal after weeks of extreme quarantine measures. China reported just 19 new infections Tuesday, down from thousands each day last month.

“Things are slowly returning to normal,” said Yang Tianxiao, a finance worker in Beijing, where the city government is gradually easing restrictions.
But in growing swaths of the globe outside China, virus-related disruptions were increasingly the new normal.

More than 100 countries — over half of the United Nations’ membership — have now confirmed cases. Panama and Mongolia, which borders China, were among the latest. Congo and Burkina Faso also confirmed their first cases, increasing the number of infections in Africa to 105 in 11 countries.

France’s government advised voters to bring their own pens to local elections Sunday so they won’t have to share. Morocco reported its first death of a virus-infected person — only the second confirmed fatality in Africa. The United Nations announced the closure of its New York headquarters complex to the general public and temporarily suspended all guided tours.

The virus reached into the corridors of power. In the United States, several senior politicians were self-quarantined and in Spain, a leading member of a far-right party tested positive for the virus. At least two top European military commanders also tested positive after a conference on an American military base in Germany, and the commander of U.S. Army Europe isolated himself in case he also was exposed.

New York Gov. Andrew Cuomo announced that the city of New Rochelle, a New York City suburb the biggest known cluster of U.S. coronavirus cases, would have a “containment center” where houses of worships and large gathering places would be closed for two weeks.

National Guard troops will help clean surfaces and deliver food in the area, a 1-mile (1.6-kilometer) radius around a point near a synagogue, Cuomo said.

In Washington state, where 19 of its 24 deaths have been connected to a Seattle-area nursing home, Gov. Jay Inslee announced new rules for screening health care workers and limiting visitors at nursing homes.

And in Oakland, California, thousands of restless passengers stuck on a cruise ship hit by the coronavirus waited their turn to get off the vessel and head to U.S. military bases or their home countries for two weeks of quarantine.

“All of a sudden a two-week vacation has turned into a five-week vacation,”said passenger Carolyn Wright, of Santa Fe, New Mexico.

Greece and Macedonia were the latest to shutter all schools, universities and kindergartens. Students at a growing number of U.S. colleges — including Harvard University and the University of California, Berkeley — were being transitioned to online classes amid a suspension of classroom instruction. Harvard students were told not to return to campus after the March spring break ends.

The virus has shaken global markets, with stocks on Monday taking their worst one-day beating on Wall Street since 2008 and oil prices suffering their most brutal losses since the start of the 1991 Gulf War — worrying people especially in the U.S. who keep much of their retirement money in stock mutual funds and use the funds to save money to pay for the college education of their children.

On Tuesday, U.S. stocks, oil and other financial markets around the world went on another wild ride and clawed back ground after their historic plunge the previous day. The S&P 500 stock index in New York closed up 4.9% Tuesday, erasing three-fifths of Monday’s loss.

Investors are likely to see more big swings until the number of infections decelerates, and fear was still rampant that economies stood at the brink of recession, market watchers said.

“We are in a global panic,” said Estelle Brack, an economist in Paris. “We are in the deep unknown.”