IOC looking at postponing Tokyo Olympics in 4 weeks of talks 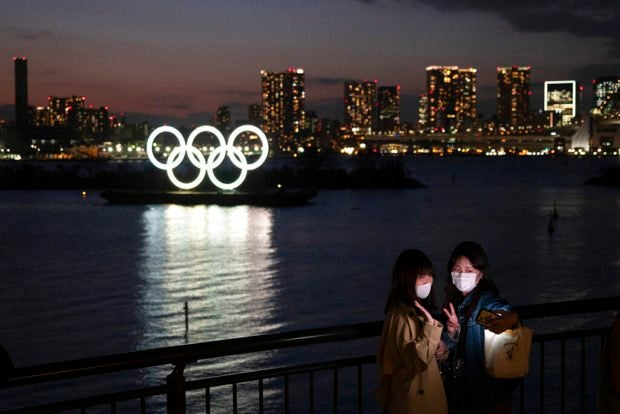 Two women take a selfie with the Olympic rings in the background in the Odaiba section of Tokyo, Thursday, March 12, 2020. Tokyo Governor Yuriko Koike spoke Thursday after the World Health Organization labeled the spreading virus a “pandemic,” a decision almost certain to affect the Tokyo Olympics. For most people, the new coronavirus causes only mild or moderate symptoms. For some it can cause more severe illness. (AP Photo/Jae C. Hong)

LAUSANNE, Switzerland — The IOC will look at postponing the Tokyo Olympics during four weeks of talks announced Sunday amid mounting criticism by athletes and sports officials during the coronavirus pandemic.

This includes “the scenario of postponement,” the IOC said in a statement, adding “cancellation is not on the agenda.”
“These scenarios relate to modifying existing operational plans for the Games to go ahead on July 24, 2020, and also for changes to the start date of the Games.” the Olympic body said.

Bach has consistently said organizers are fully committed to opening the games on July 24 — despite athlete training, qualifying events and games preparations being disrupted more and more by the virus outbreak causing the COVID-19 disease.

Criticism of the stance grew in recent days from Olympic gold medalists and by an IOC member last Tuesday, before Bach finally acknowledged an alternative plan was possible.

“Of course we are considering different scenarios,” Bach told the New York Times in an interview late Thursday.

National Olympic committees in Brazil and Slovenia later called for a postponement to 2021. Norway’s Olympic body said it did not want athletes going to Tokyo until the global health crisis is under control.

The United States governing bodies of swimming and track — two of the three top-tier Summer Games sports — have called on their national Olympic officials to push for a postponement.

“There is a dramatic increase in cases and new outbreaks of COVID-19 in different countries on different continents,” the IOC said. “This led the (board) to the conclusion that the IOC needs to take the next step in its scenario-planning.”

“The (board) emphasized that a cancellation … would not solve any of the problems or help anybody.”

In a separate statement, Bach addressed athletes who wish to compete at the Tokyo Olympics. Of the 11,000 athlete places available in 33 sports, around 4,700 have yet to be allocated.

“Human lives take precedence over everything, including the staging of the games,” Bach wrote. “The IOC wants to be part of the solution.”

Any postponement of the Summer Games would impact the Tokyo Paralympics scheduled for Aug. 25-Sept. 6.

“As you can imagine, potentially changing the dates of the Olympic and Paralympic Games is a huge logistical challenge, and the IPC will support the IOC every step of the way,” the International Paralympic Committee said.

“Currently it is vital that everyone, including athletes, stay at home to help prevent the further spread of this horrible disease which is impacting the global community,” the Germany-based IPC said.

Read Next
IN PHOTOS: Implementation of ‘stay at home’ order starts