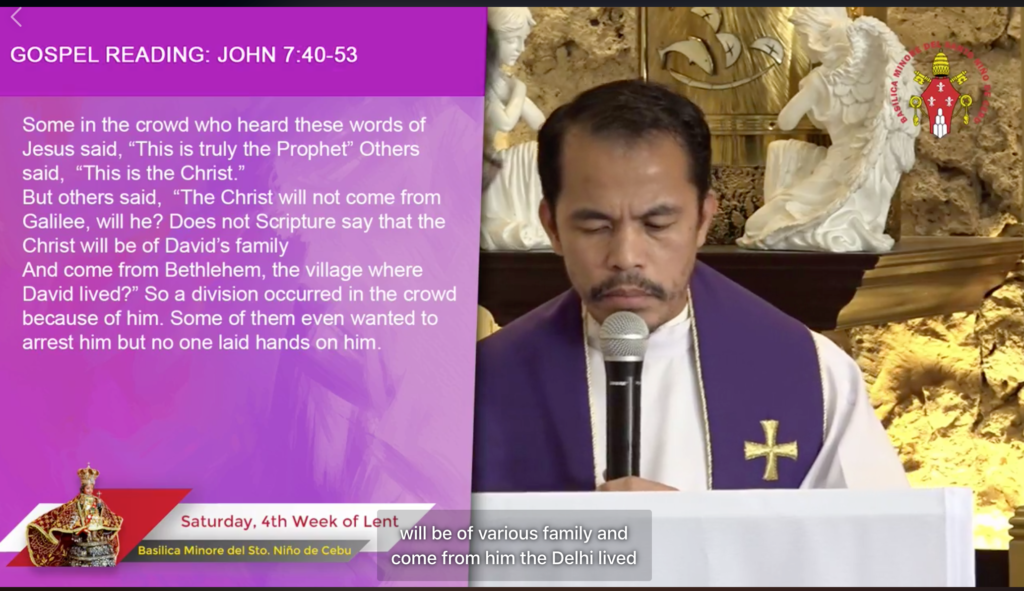 Churches have turned to live streaming the holding of the Holy Masses such as the Basilica Minore del Santo Niño amid the COVID-19 pandemic. Above is a screen grabbed shot of the online Holy Mass of the Basilica. | Screengrabbed from online Mass of Basilica

CEBU CITY, Philippines — Digital technology presents an often bewildering array of choices for organizations as it compels them to produce content on their social media pages. Slideshows, and videos, join social networks, and use mobile technology to enhance the delivery of content online.

The process requires a deliberate understanding of all new technologies so that the organization can make an informed decision on why and how to utilize the digital world.

While some organizations, Catholic churches, for example, cling to traditions of holding Masses, others, however, are now adopting the dynamics of social media and uses its “Live telecast” and other tools to reach a broader audience may it be locally or internationally.

With this, churches have evolved and have brought the word of God to a more diverse audience online.

And among these churches, the Basilica Minore del Santo Niño continues to evolve in that way.

While the Basilica Minore del Santo Niño began its venture into the digital realm in mid-2017, it was not until recently when they fully utilized the capacity of the digital realm and broadcast Holy Masses through their Facebook Page.

“(At first) we only had one camera and laptop set-up,” said Shiela Gumapon who works for the Basilica Minore del Santo Niño Media Center.

But with continuous efforts and the support of the community, its media center was able to improve its one-camera set-up to a multi-camera setup.

According to Gumapon, its set-up improved with the constant determination of the team also through the help of the BMSN community and generous devotees who wholeheartedly gave their support.

Currently, its media center operates a multi-camera setup and provides streaming of their Masses daily.

“We are grateful that our set-up has improved a lot with the help of the BMSN community and generous devotees,” she added.

The word of God in the time of COVID-19

Since the government has called for an enhanced community quarantine following the rising coronavirus cases in the city, the social media now play an important role not only through news information but also through spreading the word of God.

With the government’s order to strictly follow social distancing, the Catholic church has innovated and has brought its masses to the Cebuanos through live streaming on their Facebook page.

(The use of social media where we use online live streaming is effective because the word of God has reached so many people. )

Although the basilica has already been streaming their Masses daily especially on the Novena Masses in celebration of the feast of the Señor Santo Niño, Nohara said that during this time, social media had created an avenue for those who could not go to church while observing social distancing.

Read more: How social distancing works and what it means for you

(During this time the people feel the thirst with regard to their attending Mass, but at least now the difference is they see the importance of attending Mass.)

(We now know that the church are working hard to let the Holy Mass reach our people. That is why even live streaming the Masses online, this is a big help to the faithful.)

(Even if they cannot receive the body and blood of Jesus Christ but through the spiritual or act of spiritual communion they can receive this as if they attended physically the Holy Misa.)`

According to Nohara, the church does not only provide live streaming for the Holy Masses, but they have also shared online when they pray the Rosary, Novenas, and other religious devotions that the church has to remind its audience to pause for a moment and pray.

(We also have a special prayer that we made, the exorcism to scourge the stem of the epidemic. This is a great prayer including the Oratio Imperata. This is one great way of praying to stem the epidemic.)

The priest also calls on Cebuanos to follow the guidelines imposed by the government and to continue to pray to the Lord as we continue to fight the epidemic.

He also hopes the through their efforts on social media, that the people may find comfort and solace and find healing with God.

(The government and the church should unit to attain the goal to find a solution to our problem, which still has no known cure.)

(We hope that through the social media, this online thing, can spiritually strengthen the people who seek the God, who is the creator of all — that each and everyone of us can achieve healing for the rest of our lives and to the whole world.)

Read Next
CAAP: Entire fleet of Lionair to be grounded for fatal crashes