CAAP: Entire fleet of Lionair to be grounded for fatal crashes 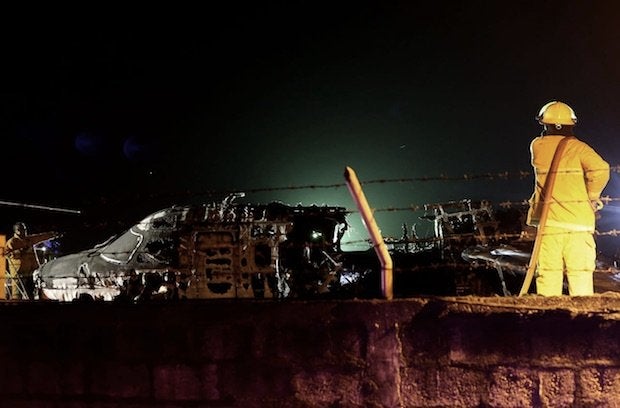 The medical evacuation plane that caught fire and exploded during takeoff at the runway of Ninoy Aquino International Aiport in Pasay City, killing all eight passengers. |Photo by RICHARD A. REYES / Philippine Daily Inquirer

MANILA, Philippines — The entire fleet of Archie Po-owned Lionair Inc. may not be able to fly after the Civil Aviation Authority of the Philippines (CAAP) flagged it for being involved in two fatal air accidents in less than a year.

“Right now the initial action that we are looking into is grounding the whole fleet. It’s quite alarming. We will be looking at the records deeply of Lionair,” CAAP deputy director general Donald Mendoza told reporters on Sunday night.

“Definitely we will have a thorough investigation to this and we will advise that the actions to be taken,” he added.

According to Mendoza, Lionair got itself involved in two fatal accidents in just six months.

On Sunday, all eight people aboard a Lionair died in a crash during its takeoff at the Ninoy Aquino International Airport (NAIA).

The plane — a Westwind 24 with registry number RPC 5880 under Lionair Inc. (not to be confused with Lion Air, the Indonesian airline company) — exploded while it was taking off at the end of Naia’s Runway 24 around 8 p.m.

The flight was a medical evacuation mission bound for Tokyo Haneda Airport in Japan.

READ: Plane going to Japan explodes on NAIA runway, killing all 8 people on board

The fatalities involved the six crew who are all Filipinos, and the two passengers who are Canadian and US nationals.

Authorities could not give the details and identities of the fatalities as the operator of the aircraft still has to inform their families.

Monreal neither denied nor confirmed if the passenger was being flown for conditions related to the novel coronavirus disease (COVID-19).

He said the same plane was used to deliver personal protective equipment for frontline health workers in Iloilo on Saturday. Monreal noted it was able to return safely to Manila. Lionair volunteered its planes to fly medical supplies in the government’s fight against COVID-19.

CAAP confirmed Lionair was also the operator of the Beechcraft King Air 350 plane with registry number RPC 2296 — another medical evacuation mission — which crashed in a resort area in Calamba City in Laguna province on Sept. 1, 2019.

The accident killed nine people on board, including the pilot and a copilot, and injuring two people on the ground.

The plane came from Dipolog City in Zamboanga del Norte province and was en route to airlift a passenger to Manila when it exploded in flames and crashed at a residential area in Barangay Pansol in Calamba, a resort area popular for its hot springs and swimming pools.

CAAP has yet to publish the results of the investigation of last year’s crash. /atm