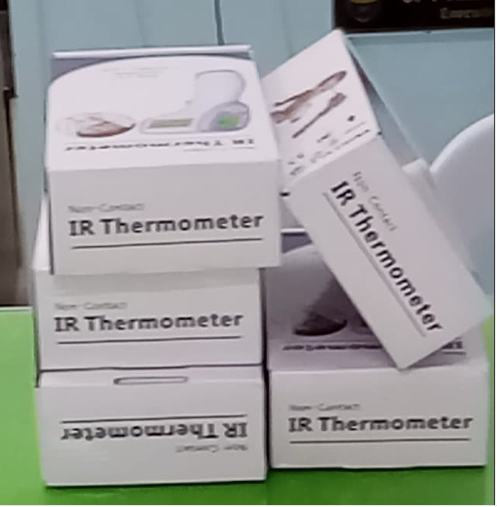 CEBU CITY,  Philippines — Agents of the National Bureau of Investigation in Central Visayas have cracked down on online sellers of overpriced medical product and arrested two men in two separate operations in Cebu City on Thursday afternoon, April 2, 2020.

First to fall was Joher Ardon, 46,  who was caught inside his house in Barangay Banawa, Cebu City, in an entrapment operation for allegedly selling overpriced thermal scanners.

Ardon told the NBI-7 agents that he got his supply from a certain Jeremy Caño, who was arrested later in a followup operation in Barangay Kinasang-an Pardo, Cebu City.

Caño, 44, was later found out to have connived with Ardon on selling the thermal scanners at P5,000 per box. The price ceiling for a single piece of a thermal scanner is at P1,000 only, records from NBI-7 show.

A total of nine thermal scanners were confiscated from both suspects.

Some online sellers have jacked up prices of these medical products which have been in demand because of the coronavirus crisis.

One in Lapu-Lapu City and another in Mandaue City where a Consolacion resident was also caught selling these overpriced products during an entrapment operation.

Meanwhile, both Caño and Ardon, residents in Cebu City, are now under the custody of NBI – 7.

Charges for violating the Consumer Protection Act or Republic Act No. 7581 will be lodged against the two suspects. /dbs