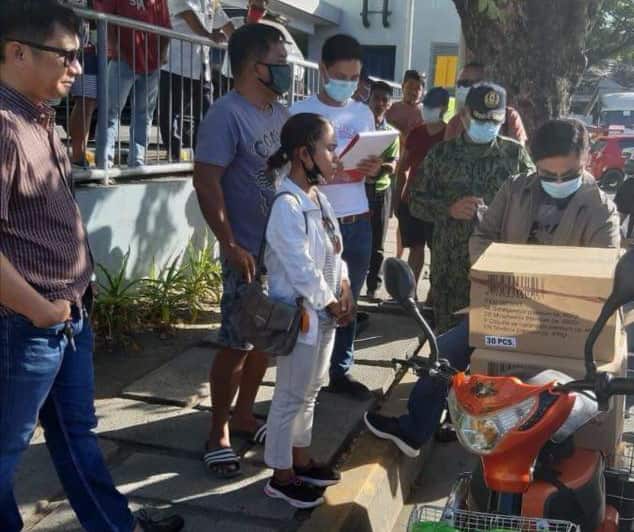 Mia Benett is arrested for selling bottles of alcohol for way over its standard retail price. | Norman Mendoza

LAPU-LAPU CITY, Philippines — A 31-year-old female online seller was arrested for selling overpriced bottles of alcohol during an entrapment operation in Lapu-Lapu City at 4 p.m. of March 27, 2020.

The law enforcers said that Benett drove an e-bike to the meet up place in Barangay Basak and brought with her 5 boxes containing 30 bottles of disinfectant.

The composite team from the City Intelligence Branch, Criminal Investigation and Detection Group in Central Visayas, the Philippine Air Force and the Food and Drug Administration moved in to arrest the suspect when the transaction was done.

Police said that each of the five boxes contained 30 bottles of 375 ml alcohol that she each sold for P150.

A 375 ml bottle of alcohol in drugstores will only cost around P50.

Police said if she had sold the disinfectants in the five boxes, Benett would have earned P22,500 or P4,500 per box.

Benett was detained at the Lapu-Lapu Police Office headquarters holding cell pending the filing of charges.

Police said they were readying a case against the suspect for violating the Price Act and estafa./dbs