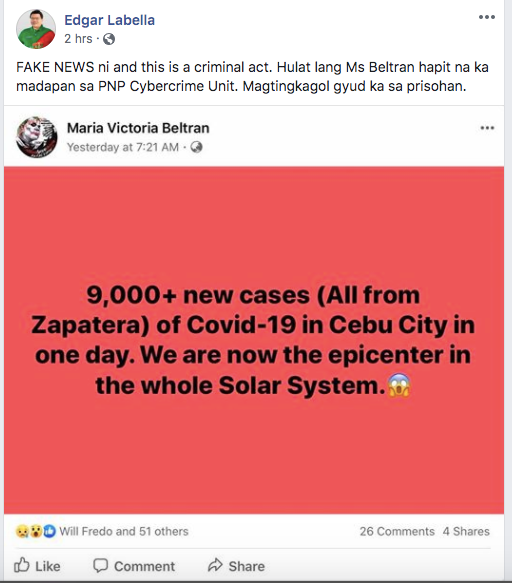 CEBU CITY, Philippines — The Cebu City government will be going after netizens spreading wrong information online that may be detrimental to the worsening situation in the city.

(This is fake news and a criminal act. Wait, Miss Beltran, the Philippine National Police Cybercrime Unit is looking for you. You will be rattling inside the prison cell.)

Beltran in an official statement decried the threat of Labella over the post. She said there was no intent to spread confusion and fear by the posting of the said post.

“But seriously, there are a lot of more important things that the Honorable Mayor should focus on, instead of Ms. Beltran’s posts. The people of Cebu City expects him to lead decisively by making sure that we have the virus contained, not focus on pettiness,” said Beltran.

She said that if Labella would continue with his threat, her camp would be filing countercharges including asking for dismissal from service the law enforcers who would execute a clearly invalid and illegal order.

This is not the first fake news spreading in the city the past few days. On Friday, April 17, 2020, an unsigned, undated, and unnumbered Executive Order (EO) spread online.

The EO details plate number coding and color-coding of cars in the city to control the movement of traffic.

This spread shortly after the Land Transportation Office (LTO) called the attention of the city government over the increasing volume of cars on the streets amidst the enhanced community quarantine (ECQ).

“For the record, I did not issue such executive order and there is no existing policy which imposes a scheme to regulate the vehicles in Cebu City. That executive order is just a mere scrap of paper—it was unnumbered, undated and unsigned.

“We are still evaluating the traffic situation in our streets as I already directed Police Colonel Josefino Ligan, the acting city director of the Cebu City Police Office, to strictly enforce border and control checkpoints,” said the mayor.

He said at this point of the crisis, fake news would only worsen the situation causing unnecessary panic

“The sharing of unverified or speculative information, like this unsigned EO on vehicle-coding which is still under discussion, deliberation and debate, does not help the government at all in its sincere efforts to combat this dreaded virus,” said Gealon.

High-profile lawyer, Amando Virgil Ligutan, questioned the move of the city government to file charges against the netizen when the statement was a reaction to the City Health Department’s previous announcement that mass testing will be stopped in Sitio Zapatera.

The City Health Department took the cue from the Department of Health after the agency declared the entire sitio as infected.

“Somebody posted about it, apparently taking the cue from the City Health Department’s pronouncement. Now, City Hall will file a criminal case against that person? Is city hall deflecting public attention from the confusion it itself is creating?” said Ligutan.

The Department of Health already said that expanded testing would continue in the barangay and that even if the sitio would be considered infected, the residents would not be added to the number of actual cases. /dbs