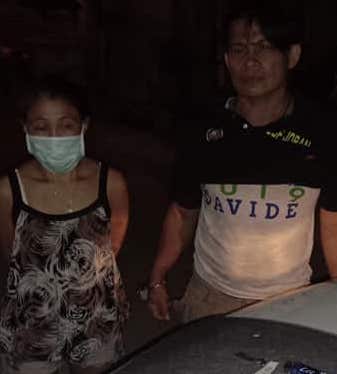 MANDAUE CITY, Cebu – An alleged member of police auxiliary group Guardians who volunteered manning a police checkpoint was arrested in a buy-bust operation in Barangay Looc here past 1 a.m. on Monday, April 27, 2020.

The elements of the City Intelligence Branch (CIB) of the Mandaue City Police Office (MCPO) led by Police Lieutenant Colonel Franco Rudolf Oriol conducted the drug buy-bust operation after receiving a tip from a concerned citizen last Friday regarding the illegal drug activity of a suspected woman drug dealer and a Guardians member.

The operation led to the arrest of Jovani Candelosa, 48, and the subject of the operation, Analiza Mondragon, 49, both residing in Barangay Looc.

Police recovered from Mondragon a medium pack of suspected shabu estimated to weigh 5 grams worth around P34,000 based on the Dangerous Drugs Board (DDB).

Candelosa was in possession of drug paraphernalia when police got hold of him during the operation.

Candelosa has been volunteering in a police checkpoint along AC Cortes Avenue while the city is under Enhanced Community Quarantine (ECQ).

Police said some of his colleagues manning the checkpoint noticed something unusual with the way he talked with passing motorists. He was then placed under surveillance and this is when police learned that the suspect knew somebody who can supply them with illegal drugs.

Candelosa, who was wearing a Guardians polo shirt, said he was indeed a member of the group.

MCPO Chief Colonel Jonathan Abella earlier warned his police officers to be careful with choosing auxiliary groups to assist them in checkpoints.

The suspects are temporarily detained at the Mandaue City Police Office Holding Cell pending the filing of charges. /bmjo