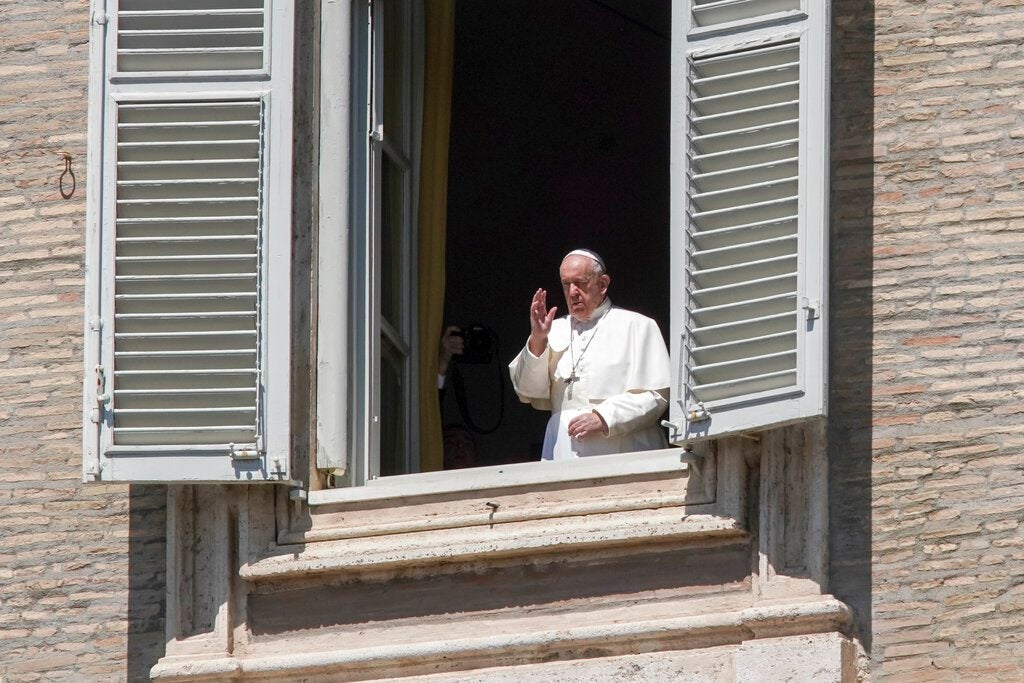 Pope Francis delivers his blessing from the window of his studio overlooking an empty St. Peter’s Square, due to anti-coronavirus lockdown measures, at the Vatican, Sunday, April 26, 2020. (AP Photo/Andrew Medichini)

ROME — Pope Francis waded into the church-state debate about virus-imposed lockdowns of religious services, calling Tuesday for “prudence and obedience” to government protocols to prevent infections from surging again.

Francis’ appeal came just two days after Italian bishops bitterly complained that the Italian government offered no provisions for Masses to resume in its plan to reopen Italian business, social and sporting life starting May 4.

While it wasn’t clear if Francis intended to send a different message than the bishops, his appeal for obedience and prudence was in line with his previous calls to protect the most vulnerable, and for economic interests to take a back seat to shows of solidarity.

At the same time, Francis has certainly chafed at the lockdown, saying early on that he felt like he was in a “cage” and lamenting more recently that the church isn’t really “Church” without a community of faithful present and the administration of sacraments.

“As we are beginning to have protocols to get out of quarantine, let us pray that the Lord gives his people, all of us, the grace of prudence and obedience to the protocols so that the pandemic doesn’t return,” Francis said Tuesday.

Italian Premier Giuseppe Conte’s government announced Sunday that funerals could resume starting May 4, but there was no information on when the faithful could attend Mass.

In response, the Italian bishops’ conference expressed outrage that its proposals of safety protocols had apparently been ignored.

The bishops said they “cannot accept that freedom of worship is compromised.” They argued the government should have distinguished between its duty to provide health guidance and the church’s right to “organize the life of the Christian community, respecting the measures but in full autonomy.”

Conte’s office hastily responded that it was working on protocols to allow the resumption of liturgical services as soon as possible but “in conditions of maximum security.”

Francis weighed in on the fraught issue at the start of morning Mass celebrated alone in the chapel of the Vatican hotel where he lives. Francis has been celebrating daily Mass to empty pews in observance of the Vatican’s own lockdown measures, which mirror those of Italy, the epicenter of the European pandemic.

The Vatican has recorded 10 positive cases, the last one confirmed Tuesday in a Holy See official who tested positive but is now asymptomatic. All the official’s colleagues have tested negative, the Vatican said in a statement.

When Conte locked all of Italy down in March, Francis’ vicar of Rome sparked an outcry among some of the faithful when he ordered all churches shut to comply.

The vicar, Cardinal Angelo De Donatis, relented after speaking to Francis and allowed diocesan churches to remain open for individual prayer. De Donatis later tested positive for the virus and was hospitalized for 11 days before being released earlier this month.

Italian bishops have been in negotiation with the government about a reopening of public services, and on Tuesday the bishops said those negotiations were continuing despite the “tough” tone of their Sunday statement.

“I think in any relationship, if it’s true, there will be moments in which you can and must raise your voice, as long as this doesn’t become the norm,” the undersecretary of the bishops conference, the Rev. Ivan Maffeis, told the TV2000 broadcaster.

Francis’ weekly Sunday blessings from his window overlooking an empty St. Peter’s Square, not to mention his solo Holy Week and Easter services, have served as a stark visual reminder of how the pandemic has radically altered the practice of communal religious observance around the world.

Some Catholic conservatives and traditionalists have bristled at the closures and framed them as a violation of their right to religious liberty. Some evangelical pastors in the U.S., Brazil and elsewhere have resisted lockdowns and held services, and big religious observances in South Korea, France and Iran have been been blamed for helping to spread the infection early on.