Trump says ‘glad’ Kim Jong Un ‘is back, and well’

WASHINGTON, D.C., United States – US President Donald Trump said Saturday he was “glad” about the reappearance of Kim Jong Un and that the North Korea leader is apparently healthy. 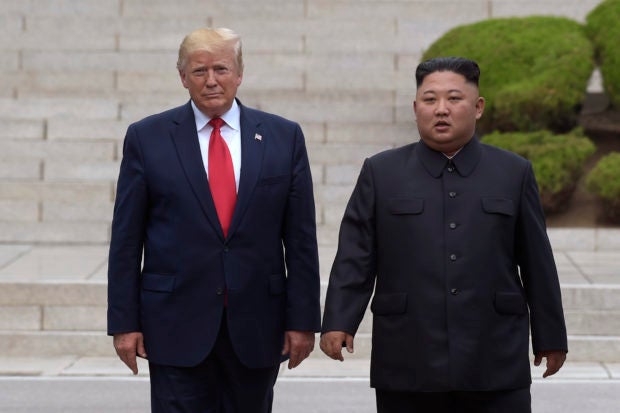 FILE – In this June 30, 2019, file photo, President Donald Trump, left, meets with North Korean leader Kim Jong Un at the North Korean side of the border at the village of Panmunjom in Demilitarized Zone. North Korea threatened Thursday, Dec. 5, to resume insults of Trump and consider him a “dotard” if he keeps using provocative language. (AP Photo/Susan Walsh, File)

“I, for one, am glad to see he is back, and well!” Trump tweeted, following Kim’s first public appearance in nearly three weeks after intense speculation that he was seriously ill or possibly dead.

North Korean state television showed Kim walking, smiling broadly and smoking a cigarette at what the North said was the opening of a fertilizer factory on Friday in Sunchon, north of Pyongyang.

Rumors about Kim’s health have been swirling since his conspicuous no-show at April 15 celebrations for the birthday of his grandfather, the North’s founder — the most important day in the country’s political calendar.

His absence triggered a series of fevered rumors and unconfirmed reports over his condition.

Kim’s disappearance from public view came as Pyongyang’s talks with Washington over the North’s nuclear arsenal are at a standstill, despite three meetings between Kim and Trump.

If Kim had been incapacitated or dead, it would have increased uncertainty over the process.