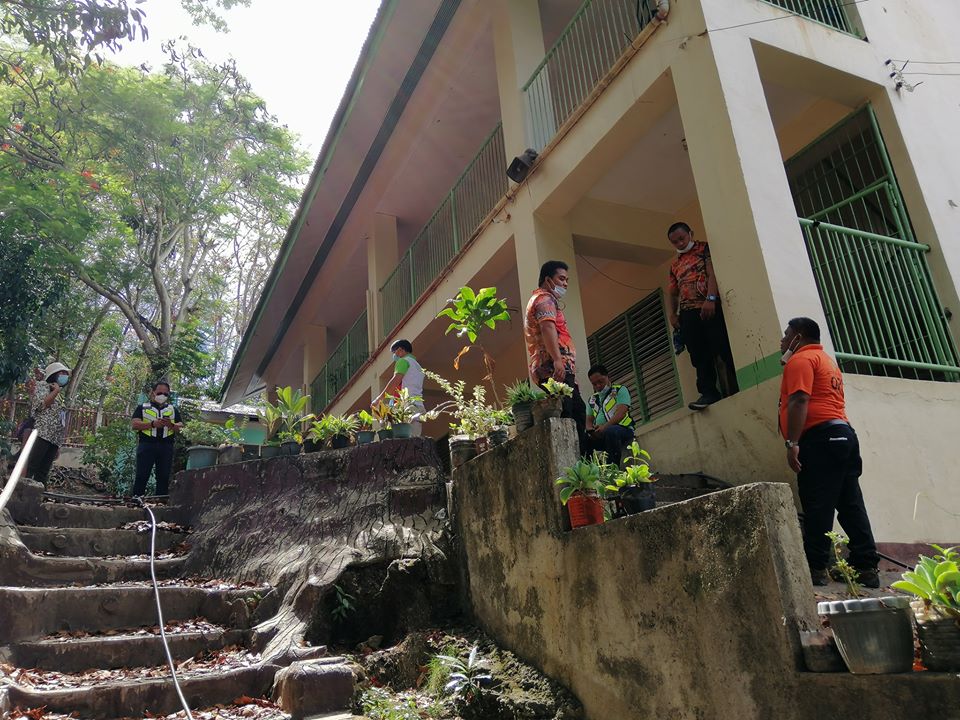 Officials of Barangay Bacayan and the Cebu City government led by Councilors Dave Tumulak and Joel Garganera inspect the Bacayan Elementary School, which is being prepared to house the 40 new patients in the barangay. | Photo courtesy of Barangay Bacayan

CEBU CITY, Philippines – Officials from Barangay Bacayan and the Cebu City government have started converting the Bacayan Elementary School into an isolation center to house asymptomatic coronavirus disease 2019 (COVID-19) patients in the village.

Bacayan Barangay Captain Zenaida Colina confirmed to CDN Digital in a phone interview on Monday, May 11, that they were preparing to transfer the 40 asymptomatic patients to the school.

Colina said they had sought approval from the city government to use the Bacayan Elementary School, which was previously not part of the city’s 19 schools identified to serve as Barangay Isolation Centers (BIC), to shelter those who have been infected with the virus.

“Supposedly, our patients will be transferred to Talamban where there’s a BIC there. Considering it’s distance, we asked the city if we can use our school instead,” she said in Cebuano.

Colina added that they were aiming to have the patients, who were residing in an area called Kasagingan or Banana Republic in Sitio Upper Bacayan, transferred to Bacayan Elementary School on Monday evening.

Colina said around 60 families or 300 individuals reside in Kasagingan, a densely populated area in Barangay Bacayan.

She said the place had been placed under lockdown for more than a week after health officers discovered the village’s first COVID-19 patient there, who is now being treated at a government hospital in Cebu City.

“We did not take any chances, considering the houses in Kasagingan are built so close to each other. We immediately placed it under lockdown,” said Colina.

The village chairperson said the first COVID-19 patient in Bacayan, one of the city’s mountain barangays that borders Talamban and San Jose, happened to be a vendor from the Carbon Public Market.

The 40 new COVID-19 cases found in their barangay last Sunday were close contacts of the vendor, said Colina.

“She was admitted last April 28. Last May 4, they collected swab samples from 63 individuals, and just last Sunday, we found out 40 of them tested positive,” she said in Cebuano.

Colina also urged her constituents to remain calm, and stay in their homes in order to prevent the virus from spreading to nearby communities. /dbs