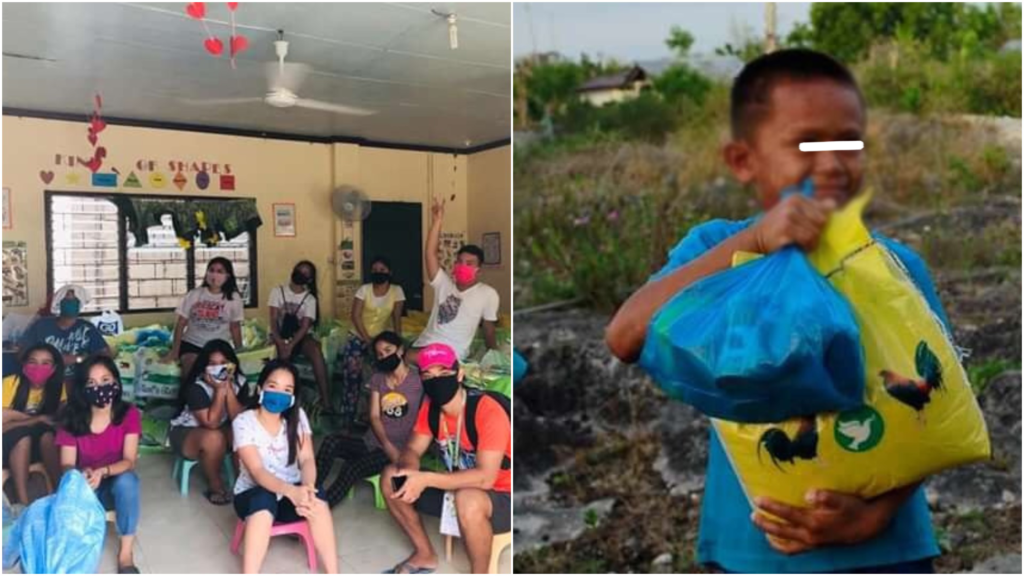 (Right) Members of the SK Council in Moalboal town. (Left) One of the beneficiaries of the food packs which they distributed on April 20, 2020. | Contributed photo

MOALBOAL CEBU —They may still be young, but members of the Sangguniang Kabataan (SK) in Barangay Basdiot in Moalboal town know that they also needed to do something to help their barangay officials in the fight against the ill effect of the coronavirus pandemic.

Youth leaders and some volunteers started a donation drive on April 5 and raised at least P30, 000.

They added the allocation to the P451,300 SK funds which they set aside for the purchase of rice for their 2, 000 target beneficiaries who come from their seven sitios.

The distribution of the food packs that consisted of five kilos of rice, assorted canned goods, eggs, noodles, soap, and shampoo was made on April 20, 2020.

“Tanan among gihatagan madato or pobre naka dawat ug food supply from the SK. (SK officials distributed food packs to all residents, whether rich or poor.)  There were 2,000 households that were given,” said SK Councilor Laurence Charl Cabusog.

Cabusog, 21, said they also handed food packs to frontliners who have been helping their barangay in the fight against the coronavirus disease 2019.

“We have heard those voices in need and heeded the call of the community to survive. In response to this arduous time, we can’t see them suffer from extreme hunger,” he said.

Cabusog, who is also the vice-president of the University of San Jose Recoletos (USJR) Student Council, said that the food distribution which they organized required a lot of hard work.  They spent most of their time preparing the food packs to make sure that these will reach its intended beneficiaries.

“It was fulfilling,” he said of their house to house distribution.

Cabusog is asking other youth leaders in Cebu to also organize activities that will help families affected by the pandemic.

“We truly believe that (the) youth has a great role too in this situation. Young people like us are torchbearers in times of despair who are developing and implementing solutions on multiple fronts,” Cabusog said. / dcb