CEBU CITY, Philippines —At least 206 swab samples from persons who participated in the community mass testing using rapid antibody tests in the cities of Cebu, Mandaue and Lapu-Lapu have been collected and are due for coronavirus disease (COVID-19) testing using polymerase chain reaction (PCR) machine.

These samples are from the respondents of the three cities who were found positive for antibodies Immunoglobulin M (IgM) and a combination of IgM and Immunoglobulin G (IgG).

Since the start of the mass testing in the three cities last May 6, 2020, a total of 422 individuals were already tagged as needing to undergo PCR test. This constitutes to 1.9 percent of the total number of blood samples that have been tested.

As of May 19, the strategic community mass testing in the tricities has already collected 42,774 blood samples, of which only 22,049 have been subjected for testing using rapid antibody test kits. 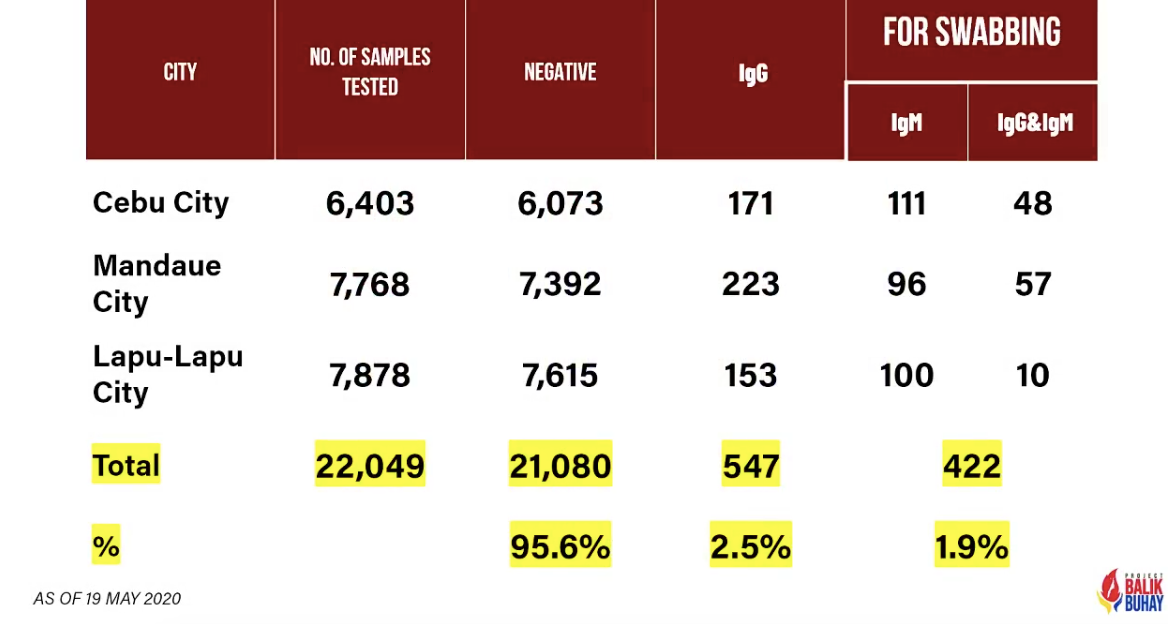 The breakdown of tested samples collected from the cities of Cebu, Mandaue and Lapu-Lapu as of May 19.

“By Friday, pinakadugay gyud Sabado, naa na tanan ang samples ug na-examine na and we will be able to update you with the true positive of those that are positive (for the antibodies) and will require swabbing,” said Dr. Mary Jean Loreche, chief pathologist of the Department of Health in Central Visayas (DOH-7).

Loreche earlier explained that the presence of this combination of antibodies may indicate probable infection. However, individuals who would be found with these antibodies will still need to undergo confirmatory test using the PCR machines, the DOH-recognized gold standard for diagnosing COVID-19. 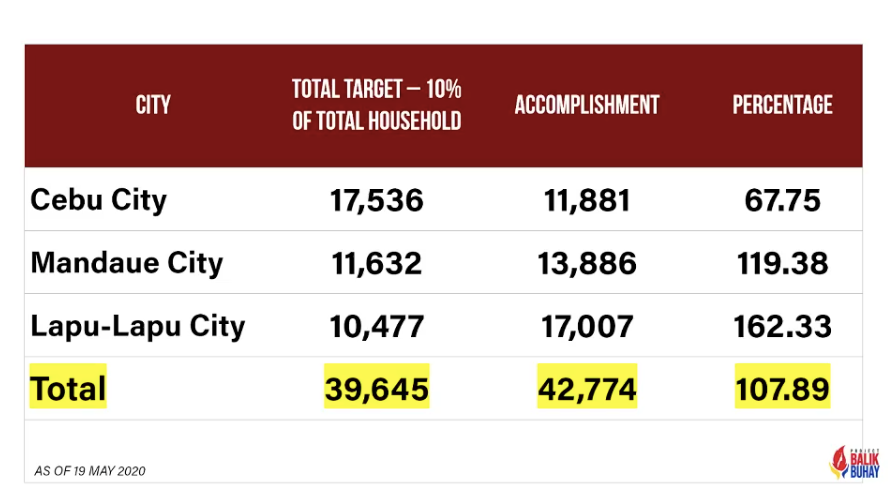 Accomplishment data of the mass testing in the tricities as of May 19.

The community testing in the three cities under the Project Balik Buhay began May 6. As of May 19, the total samples collected have already surpassed its target because the cities of Mandaue and Lapu-Lapu have exceeded their target.

This Wednesday, May 20, is already the last day of the extended testing in the low turnout areas in Cebu City. /bmjo