PISTON to DOTr: Don’t use pandemic to get rid of old PUJs 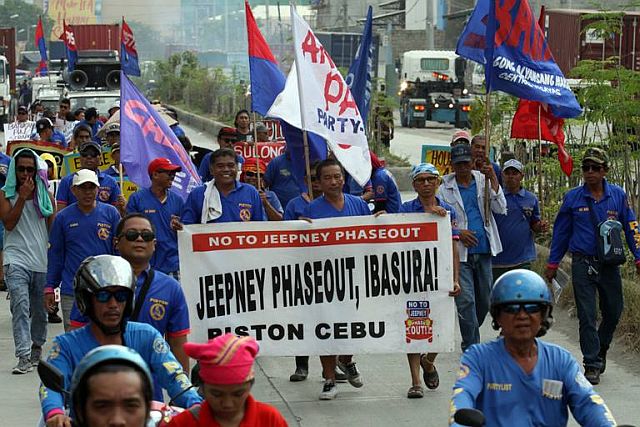 In this 2017 photo, members of Piston Cebu stage a rally protesting the plan to phase out of jeepney units that were at least 15 years old. (CDN DIGITAL file photo)

CEBU CITY, Philippines —  Progressive transport group, Piston, has called on the Department of Transportation (DOTr) anew to allow traditional jeepneys to ply the street as most parts of the country transition to general community quarantine (GCQ).

At 10 a.m. this Monday, June 1, 2020, the Cebu Chapter of the Pinagkaisang Samahan ng mga Tsuper at Operators Nationwide (Piston-Cebu) will be joining the “Busina para sa Balik-Pasada”, an online protest to air their calls for the government to allow them to resume operations.

Greg Perez, Piston-Cebu chairman, said a lot of the jeepney drivers and small-time operators were already hungry as the halt in public transportation was on its third month.

Even in areas that are now under GCQ, only buses and modern jeepneys have yet been allowed to operate in order to observe social distancing in public transport.

This move of the government, Perez said, had become a subtle way to effectively phaseout the old jeepney units.

(They used the situation, our challenges or crisis that we are facing. They are using this state of crisis to phaseout the jeepney, which are the livelihood of our fellow drivers.)

Perez said the government, instead of taking their livelihood, should help them survive by allowing them to operate.

(Many of us drivers have hungry families because only a few of us received the government assistance. It was even only 1 percent of our members who received the aid. Our funds have already been nearly used up and most of us are deep in debt because of the long period where we could not ply our routes because of the pandemic)

But Eduardo Montealto Jr., Land Transportation Franchising and Regulatory Board (LTFRB-7) Central Visayas director, refuted that the government was using the halt in public transport due to the community quarantine to phaseout the jeepneys.

In a separate interview, Montealto said regardless if the coronavirus pandemic happened or not, the DOTr’s Jeepney Modernization Program would have still rolled out come July 1.

Montealto said the COVID-19 pandemic, in fact, had stalled the implementation of the program since their processing fo the subsidy for the drivers who would take part in the modernization had stopped due to COVID-19.

The LTFRB-7 director said that they would still continue to facilitate groups of drivers who would adapt to the modernization program even beyond July 1./dbs