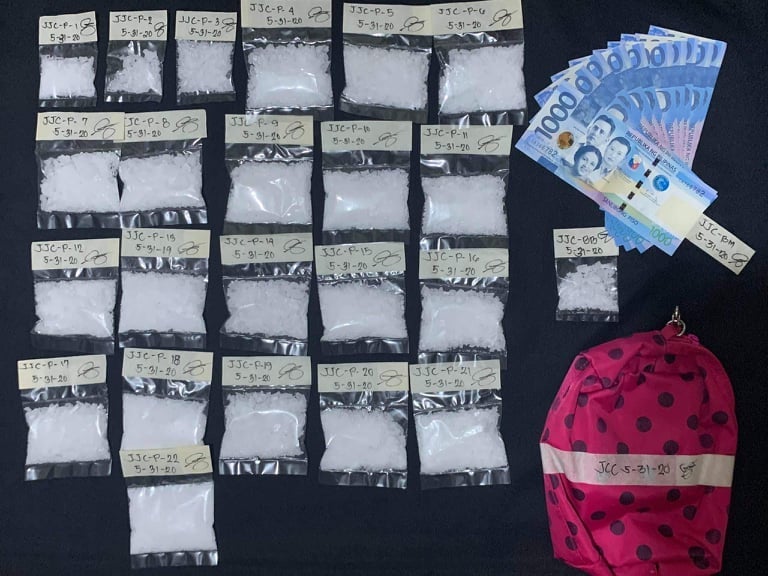 At least 350 grams of suspected shabu worth P2.3 million were confiscated from a 23-year-old woman in Barangay Labangon buy-bust this afternoon, May 31, 2020. | Contributed Photo

CEBU CITY, Philippines — What birthday celebration can be considered as a person’s worst celebration in his or her life?

Maybe, if one ends up celebrating it inside the jail — just like what happened to 23-year-old Ma. Joe-Ann Juezan Cabornay of Sitio Santo Niño, Barangay Guadalupe in Cebu City.

Cabornay was caught with P2.3 million worth of suspected shabu during a buy-bust operation in Sitio Bliss, Barangay Labangon in Cebu City at 5:45 p.m. today, May 31, 2020.

She awaits the filing of a case for the sale and possession of illegal drugs at the Cebu City Police Office detention facility in Camp Sotero Cabahug along Gorordo Avenue in Cebu City.

With this, Cabornay, who will turn 24 tomorrow, June 1, will have to celebrate her birthday inside the CCPO detention cell instead of spending it with family and friends.

Police Major Randy Caballes, City Intelligence Branch chief, said that they had placed Cabornay under surveillance for a week before they conducted the buy-bust operation that led to the arrest of the suspect and confiscation of 350 grams of suspected shabu.

Caballes said the suspected shabu confiscated had an estimated Dangerous Drugs Board value of P2,380,000.

He said that the operation against Cabornay was conducted after they received reports about her alleged illegal activities.

The report landed her in the regional level drug watchlist.

Caballes said that Cabornay’s area of disposal were around Labangon and Pardo.

As of this time, Caballes said they were still gathering more information about the background of Cabornay and her possible involvement with drug groups operating around Cebu City./dbs

Read Next
What happens if a worker in Cebu City tests positive of COVID during GCQ?