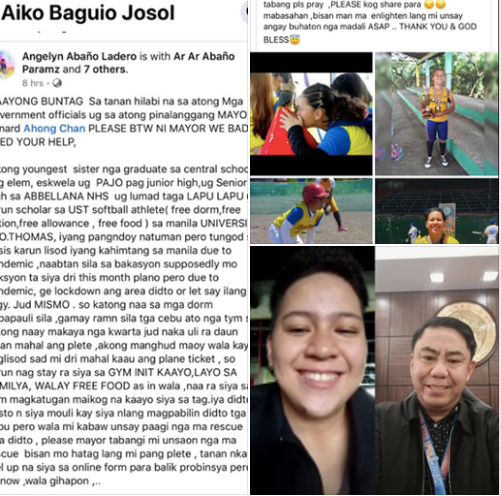 The Lapu-Lapu City government assisted a certain Aririane Alexis Parame, 20, who is a softball varsity player at the University of Santo Tomas.

Parame, who has been a varsity player in UST since 2018, was one of the many Cebuanos who were stranded in Metro Manila for the last couple of months due to the lockdowns.

Parame said that her funds were tight and that she could not afford a plane ticket or any ticket in that sense to fly back home.

And because of this, she stayed in the fitness gym owned by her friend in Taguig City when the school dormitory was closed since it was already summer break and that the dormitories were subjected to disinfection.

With what she has endured during the pandemic and being away from home it pushed her sister to try their luck in messaging Lapu-Lapu City Mayor Junard “Ahong” Chan.

Angelyn Librado sent a message to Mayor Chan on Sunday, May 31, 2020, in which the mayor took notice and acted upon the situation.

(We helped in processing the papers and documents and in booking a ticket for her return here in Lapu-Lapu.)

Chan also mentioned that Parame had been tested negative of the virus.

Now, Parame’s family in Barangay Poblacion, Lapu-Lapu City is beyond ecstatic that finally after months of praying and hoping their youngest sister will finally be home. /dbs

Your subscription could not be saved. Please try again.
Your subscription has been successful.
Read Next
‘If I had not been SolGen, I will make you eat your words,’ Calida tells Coco Martin