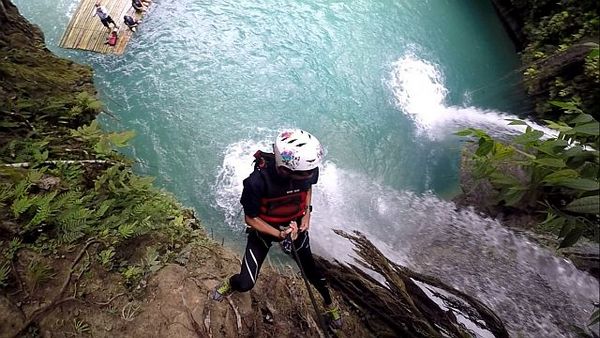 Rappelling at the Kawasan Falls in Badian town in southern Cebu is among the extreme sports activities offered by tourism operators in Cebu. | CDN Digital File

In a virtual press conference with members of the Interagency Task Force on the Management of Emerging Infectious Diseases (IATF-MEID), Garcia said the province will now start to focus on reopening the tourism industry, which is considered a major economic driver in the province.

“There are a number of our towns that are tourist destinations and right now, since tour activities have been halted, there are many that are out of work,” Garcia said.

Even prior to the quarantine controls, the tourism sector has cried losses as far back as February 2020 when the occupancy rates in hotels and the volume of travelers dropped due to fear of the novel coronavirus, SARS-CoV-2, which causes COVID-19.

The white-sand beaches of Cebu, the whale-shark watching in Oslob, the canyoneering in Badian have all gone silent for the past months with no tourist arrivals due to the pandemic, leaving those who depend on the tourism activities to sustain their families in a struggle.

“I’d like to thank the President and the IATF and the RIATF for finally granting Cebu province with the MGCQ status which will now allow for tourism activities to resume of course on very strict protocols,” Garcia said.

“There are a number of our towns that are tourist destinations and since tourism activities have been halted, there are many that have been out of work,” the governor added.

Cebu province has appealed at least twice to the national IATF to have the province’s quarantine status be downgraded to MGCQ from its earlier GCQ status since the start of June.

While the province was under GCQ and its earlier appeals for MGCQ were pending before the IATF, the Capitol has already made talks with the mayors of local government units in the provinces that have tourism offerings to discuss the protocols that they will put in place should the tourism activities be reopened.

Garcia had said that instead of viewing tourism as a leisure activity, which likes are being discouraged due to the threat of COVID-19, the provincial government views tourism as an economic driver.

“As I’ve said, we will focus now on the resumption of tourism activities in many of our towns such as whale watching, canyoneering, thresher shark watching, and a lot of other activities involved in the tourism industry,” said Garcia.

In earlier interviews, the governor said she eyes to bring to the province’s tourism front the native health and wellness regimens that she promotes to “fight” COVID-19.