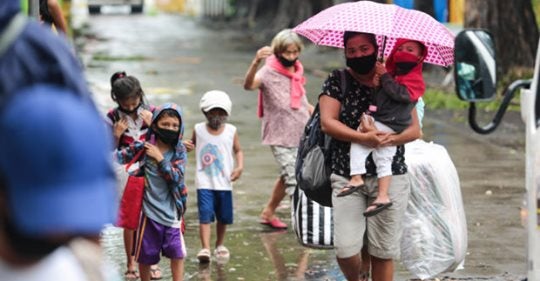 Local governments should review their disaster plans to anticipate a possible “perfect storm” of COVID-19 combining with the endemic problems of floods, landslides and diseases like diarrhea, influenza, leptospirosis and dengue, the Department of the Interior and Local Government (DILG) urged on Friday.

“We will have challenging days up ahead,” Interior Undersecretary Jonathan Malaya said weeks after the Philippine Atmospheric, Geophysical and Astronomical Services Administration declared the start of the rainy season on June 12.

“Our LGUs have a heavier duty because it is only now that we have weather disturbances in the middle of fighting COVID-19,” Malaya said, adding that the DILG Central Office Disaster Information Coordinating Center (CODIX) has already released guidelines to help local governments.

CODIX chief Edgar Allan Tabell, said LGUs “are not going into battle blind since as early as 2003, with the threat of the Severe Acute Respiratory Syndrome (SARS) and the Ebola virus disease in 2015, LGUs had been guided to plan and respond to biological disasters.”

However, the Philippines only had 14 cases of SARS during the 2002–2004 outbreak and no local cases of Ebola virus disease during the Western African Ebola pandemic of 2014-2016.

As of July 3, the Department of Health (DOH) said there were already 40,336 COVID-19 cases in the country and the response to the first two storms to hit the country this year—Typhoon Ambo in May and Tropical Depresssion Butchoy in June—showed a breakdown in health safety measures, particularly in evacuation zones.

“Considering the situation, we still would like to commend the LGUs in keeping our communities safe amid this health pandemic. We have not experienced this and we all adjusted at the start. But the lessons are coming in, and we are learning from it,” Malaya said.

Malaya added that the DILG had advised LGUs to revisit their disaster plans and integrate health safety protocols set by the DOH as COVID-19 cases continued to rise in the country.

He also reminded LGUs to carry out actions in response to natural disasters as recommended in the government’s Operation Listo manual and start preparing supplies and logistics chains with utmost consideration of COVID-19 risks.

Read Next
WHO blames ‘uncompliant’ Cebuanos for COVID-19 rise