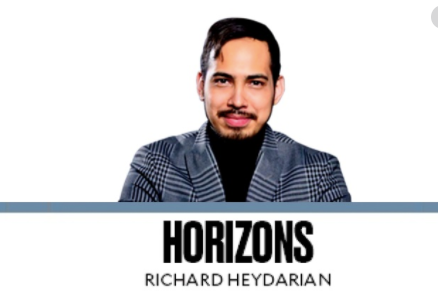 Every nation struggles to reconcile its loftiest aspirations with its darkest realities. But in a world of great contradictions, the Philippines likely stands as its ultimate and most tragic expression.

Our country is blessed with one of the world’s fastest-growing economies, and yet life has hardly changed for millions of ordinary families who face crushing poverty amid the China-originated pandemic. Our biggest cities, with their shimmering skyscrapers rising alongside dour-looking slums, scream injustice to any sensible soul and uncynical heart.

Ours is a consummate maritime nation, with the fifth-longest coastline in the world while boasting the fourth-largest shipbuilding industry in the world by gross tonnage. And yet, the Philippines has had among the most neglected naval forces on earth, lacking for so long even basic awareness of the large-scale poaching or creeping imperial invasion happening in its resource-rich waters.

It’s a nation where salesladies and janitors are expected to have university degrees, yet presidents are only required to know how to read and write. Our country is perhaps what Gatsby’s world would have looked like in the 21st century, where a deracinated elite thrives on its cross-generational apathy toward an utterly broken system.

In short, contradiction is a national tradition. So, what went wrong? Mind you, we have among the greatest talents on earth, who are constantly in demand in every corner of this world. From Harvard to Hawaii, one could see Filipinos rapidly climbing the ranks through due diligence and sheer hard work, aiding research and development in America’s most prestigious institutions. Across the sheikhdoms of the Persian Gulf, our countrymen have helped build an entirely new civilization, with the most elegant feats of engineering gracing the scenic boulevards of Doha and Dubai. Though far from perfect, our people are deeply loved across the world, thanks to our uncanny knack for seamless assimilation into the most diverse societies from the Arctic to Australia. And despite our hardships, we try our best to follow the most draconian laws and regulations. According to a recent survey by the YouGov in partnership with Imperial College London, Filipinos are the most compliant people on earth when it comes to wearing masks outside at all times (91 percent) and ensuring basic hygiene like regular handwashing with soap (83 percent) during the current pandemic.

A major study by the Asian Development Bank also showed that the Philippines has had among the strictest measures in dealing with COVID-19. In fact, we ranked second in the Asia-Pacific region in overall stringency (92.9 percent) as well as reduction (63.2 percent) in the mobility of ordinary citizens.

Up until the early 1960s, we were ahead of most our neighbors, thanks partly to the infrastructure we inherited from our colonial past. What has doomed the Philippines’ ability to fulfill its greatest potential is its rapacious oligarchy.

In “Politics,” Aristotle famously categorized polities across the Mediterranean based on the number of rulers and the quality of their reign. Oligarchy, from the Greek word oligarkhía, refers to the perverted or corrupt rule of a few.

The term “oligarchs,” however, became famous during Russia’s vicious privatization of Soviet assets in the 1990s. A few well-connected insiders managed to purchase national assets under the most suspicious circumstances, thus the birth of a new generation of overnight billionaires in Moscow and St. Petersburg.

Russian President Vladimir Putin then crushed many of these “oligarchs,” some of whom owned leading independent media outlets. Over time, the likes of Boris Berezovsky and Mikhail Khodorkovsky were seemingly replaced by Kremlin favorites.

Obviously, our “oligarchy” is less composed of liberal billionaires, who have created countless jobs for ordinary Filipinos, than the most rapacious political dynasties, which have ruthlessly dominated and shamelessly corrupted our state institutions.

Clearly, our predicament is our “pasaway” leaders, and the national and local oligarchy, not our people.

Our ultimate tragedy is that we have among the most talented people on earth, and yet we’ve never had truly great leaders to organize us into a formidable nation. And whenever our elites fail due to the most brazen displays of incompetence, not a few of them are quick to put the blame on ordinary citizens.

(The article is partly based on the author’s forthcoming book “China’s New Empire.”)