MANDAUE CITY, Cebu – After two days of not having any new cases of the coronavirus disease, Toledo City reported 13 additional cases of the infection on Saturday, August 1.

The city’s new cases include a retired Bureau of Jail Management and Penology (BJMP) personnel, who is also hypertensive and diabetic, and a lung cancer patient from Barangay Poblacion.

With the addition, Toledo City in midwestern Cebu now has a total of 128 confirmed COVID-19 cases, of which at least 43 remain as active cases.  The city also recorded 77 recoveries and eight COVID-related deaths. 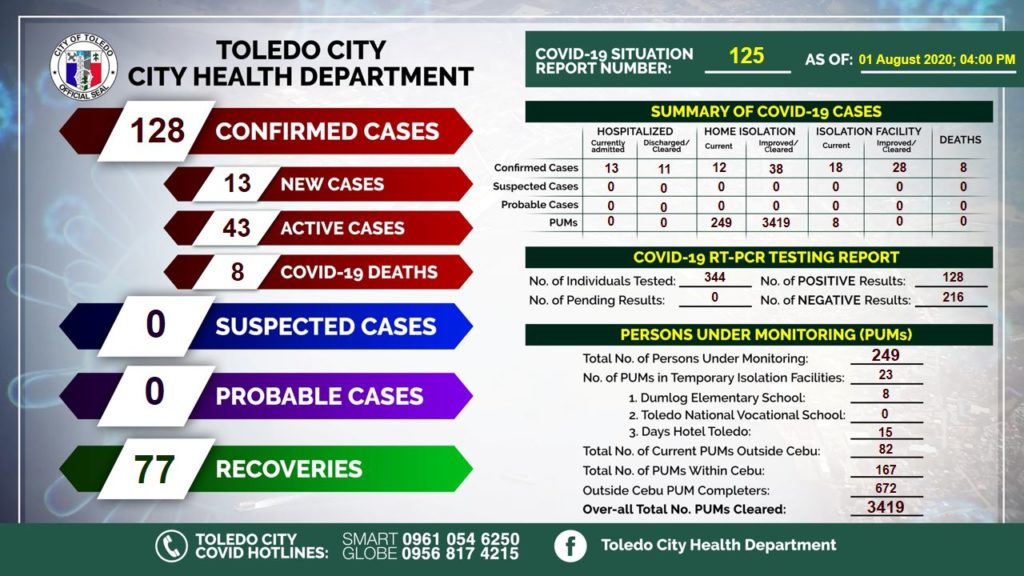 In an advisory posted late night on Saturday, August 1, the Toledo City Health Department (CHD) said that contact tracing has been ordered to identify who among the immediate contacts of the 13 patients may have also contracted SARS-CoV-2, the virus that causes the infection.

CHD said that the retired BJMP personnel, Toledo City’s Confirmed Case (CC) No. 116, is from Barangay Matab-ang and is already 69-years-old.  He started to manifest Influenza-like Illness and went to see a doctor in Cebu City for consultation.

The patient, who was said to have had contact with another COVID-19 patient, was swabbed on July 20 and is now admitted to a private hospital in Cebu City.

Diagnosed with lung cancer in June 2020, this 60-year-old female resident of Barangay Poblacion is CC123.

The CHD advisory said the patient is now admitted in a hospital and is already in a stable condition.  She has been doing her therapy and hasn’t been able to come home to Toledo City since June.

Toledo City’s 11 other new cases include a health worker from Barangay Poblacion and private sector employees who are now undergoing mandatory quarantine.

Read Next
With Cebu City in GCQ, PUVs may now do cross-border travels