Capitol to shell out P24 M for Poro waterworks project 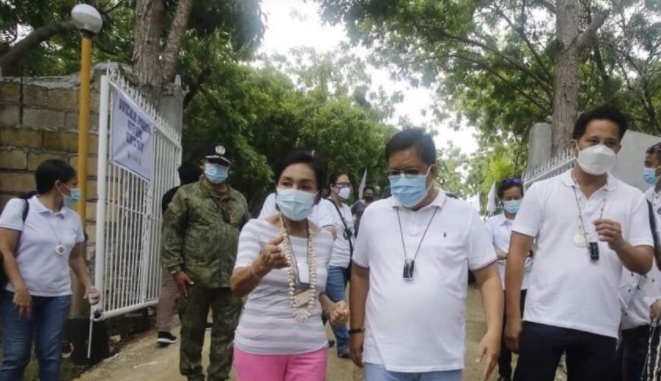 Governor Gwendolyn Garcia committed a P24 million-funding for the implementation of the first phase of a level 3 waterworks system project in Poro town, Camotes Island. (Photo courtesy of Capitol PIO)

CEBU CITY, Philippines — The Cebu provincial government has committed P24 million of funding for a Level III waterworks system project in the municipality of Poro, which would benefit five barangays in the town located on Camotes Island.

The amount will be used for the first phase of the waterworks system project, which when completed, would benefit 3,000 households in barangays Teguis, Mercedes, Esperanza, Cagcagan, and Adela.

Another 3,000 households from the said barangays will benefit from the project upon completion of its second phase.

Poro Mayor Edgar Rama, in a news release issued by the Provincial Information Office, said a sizeable chunk of the amount will be spent on upgrading the water distribution lines.

(At present, we are having difficulty in water distribution because our transmission lines are quite old and already need to be replaced. We need more pumps, machines and reservoirs to store water.)

Governor Gwendolyn Garcia, who visited Camotes Island over the weekend for the relaunch of the tourism activity there, said the Capitol will set aside P24 million for the implementation of the first phase of the project.

Garcia has earlier encouraged local government units to put up and operate its own waterworks system that would be able to provide around-the-clock service to their constituents as she previously expressed lack of confidence towards private water cooperatives and association.

Garcia said it would be better if the LGUs would be the ones to operate since the government could provide proper infrastructure and has a higher accountability. /bmjo