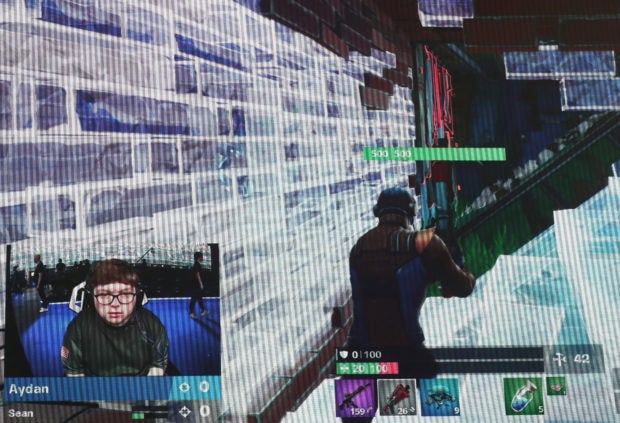 A contestant competes during the Fortnite World Cup Duos Finals at Flushing Meadows Arthur Ashe stadium in the Queens borough of New York, U.S. in this July 27, 2019 photo. | REUTERS/Shannon Stapleton

NEW YORK/BENGALURU– A YouTube alert interrupted Jack Erricker’s schoolwork on Friday morning as he and kids all over the world woke up to the news that their favorite game, Fortnite, had been taken down from Apple’s Store and Google Play store.

“It’s basically the only game I play,” said Erricker, an 11-year-old in Bengaluru, India, an avid Fortnite player on his Apple iPad. “I’m not happy, I don’t think it’s a good move.”

Fortnite, which has attracted more than 350 million players globally, is especially popular among younger gamers and has become one of the few lifelines to the outside world for kids trapped at home during the coronavirus pandemic. Unable to play outside, kids are spending hours with friends chit-chatting and fighting on Fortnite, which is free to play and available on nearly all devices.

Apple and Alphabet Inc’s Google on Thursday removed Fornite from their app stores for violating in-app payment guidelines, and the news spread rapidly among kids who are otherwise too young to get headlines off CNN, the BBC or the New York Times.

Removal means no new players can download the game and the app will not receive updates from the store. But the game will continue to work for now for those who already have it.

Calum Jack, an eight-year-old from London, heard the Fortnite news from friends in Asia as soon as he woke up at 6 a.m. The topic was “all over YouTube,” he said.

He is online up to 10 hours a day, playing, building or just chatting with up to 20 friends as far apart as Canada and India. Fortnite and other online games have been Jack’s main social outlet since coronavirus lockdowns closed schools across the world in March.

“It’s been very important since we’ve been on holiday. We play all the time,” he said.

Fortnite-owner Epic Games has challenged Apple’s policy of taking a cut of purchases made inside the app by allowing users to pay Epic directly at a cheaper price. The financial ramifications of the move were apparent even to young gamers.

On Thursday, Epic released a video within Fortnite, on YouTube and other social media channels mocking Apple’s iconic “1984” ad with the hashtag “FreeFortnite.” The hashtag has trended on social media and racked up nearly 26 million views on short-form video app TikTok.

“My friends think that Fortnite is going to win the argument,” Erricker said. “There’s a lot of people who play Fortnite, and they’ll be against Apple.”

As to what Jack will do if the game stops working on his iPad, he said: “”I’d just play on the [Sony] PS4.”