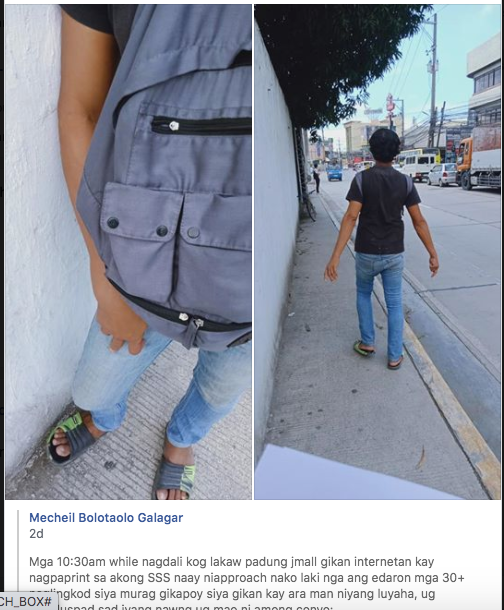 CEBU CITY, Philippines— A wandering person in the streets of Mandaue met his angel in the person of a 22-year-old student.

Mecheil Bolotaolo Galagar, posted on his Facebook account on August 14, how he became a hero for a person who was desperate to go home to Carcar City but he ran out of money.

Galagar, who was working on some of his work requirements on the morning of the 14th, told CDN Digital that a man came to him asking for cash.

“I’ve been in an internet cafe and printing my documents applying for work. When I got out, this man who looked so tired came and asked me for extra cash,” he said.

According to the man he came to the Cebu City from Carcar City to get some documents but unfortunately he was not able to do so because the establishment was closed.

The man walked from IT Park in Barangay Lahug, Cebu City to the A.S. Fortuna Street in Mandaue City not knowing what to do and where to look for cash.

He told Galagar that he spent his money mainly on transportation to the city and has not even had breakfast yet.

Galagar, who was also working with a tight budget, did not hesitate to give the man some money so he could eat and hopefully find his way back home to Carcar City.

The man was just asking for P100 just for him to get some food and hopefully get back home, but Galagar knew this would not be enough.

He took out his wallet and took P200 from it and gave it to the man.

The man refused to take the extra P100, but Galagar convinced him to accept it and then the man started crying, thanking Galagar for his kindness.

Amid the pandemic, Cebuanos will always shine in terms of helping and caring for others.

By: PR
Faces of Cebu Life!