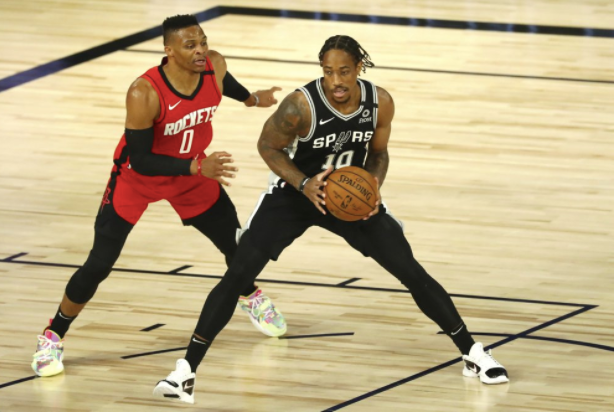 Gregg Popovich brushed off a question about whether he will return as coach of the San Antonio Spurs after their attempt to set an NBA record for consecutive playoff appearances fell short in the bubble.

DeMar DeRozan didn’t even get a question about his future because the four-time All-Star guard acquired in the Kawhi Leonard trade had already made it clear he hasn’t decided about the player option for the final year of his contract.

Waiting back in San Antonio is LaMarcus Aldridge, who missed the restart to have shoulder surgery and will soon rejoin a young group of guards that helped keep alive faint hopes of a record 23rd straight trip to the playoffs longer than expected.

“The future is bright,” said Dejounte Murray, one of those young guards. “You’ve got a bunch of young dudes who are willing to learn, willing to put the work in and willing to build the chemistry off the floor and on the floor.”

San Antonio (32-39) finished with a losing record for the first time since 1996-97, the year Popovich replaced Bob Hill not long before the club drafted Tim Duncan.

The Spurs won at least 50 games in 19 of 20 seasons. The only time they didn’t in that span, they won the first of their five championships in a 50-game season shortened by a labor dispute.

It’s only natural to ask the 71-year-old Popovich if he’ll be back after missing the playoffs for the first time when starting the season as San Antonio’s coach.

“Why wouldn’t I?” he shot back after a season-ending loss to Utah in Florida, a game rendered meaningless just before tipoff when the Spurs were eliminated from a chance to earn the eighth seed in the Western Conference.

Told people were worried whether he would come back, Popovich said, “You trying to flatter me?”

The Spurs went 5-3 in the bubble after Popovich made it clear going in he considered the playoffs a long shot and wanted to focus on development with the likes of Murray, Derrick White and Lonnie Walker IV.

“I’m thrilled at the way they played,” Popovich said. “They had no shot to get into this thing. And they basically willed themselves into it to have this opportunity. This is the best we’ve played all year.”

It makes sense for the 11-year veteran to opt in at nearly $28 million in the final season of a $139 million, five-year contract he signed with the Raptors in 2016. The economic uncertainty of the pandemic is among the reasons.

The return of Aldridge is another. While the Spurs had seven players average in double figures, DeRozan and Aldridge averaged almost twice as many points as the rest of them. The 35-year-old Aldridge has one year remaining on his contract as well.

“LaMarcus is a dominant player in this league,” said DeRozan, who just turned 31. “Just to have these guys develop under the circumstances can’t do nothing but add to the fold once we all get back together healthy. Kind of a great feeling understanding once we’re healthy, understanding what we really could be.”

Murray is looking forward to a normal offseason after tearing a ligament in his right knee early in the 2018-19 season. The rehab work a year ago got him ready for the opener this season. Now he will resume regular training at some point.

ANOTHER YOUNG ONE TO WATCH

Keldon Johnson averaged 14.1 points in the bubble after the 20-year-old was under 9 per game before the shutdown. DeRozan is also high on Trey Lyles, a starter who missed the restart after undergoing an appendectomy.

“We’re just a whole lot of young talented guards who are trying to play up and down and play defense,” said Walker, who the Spurs still hope can be a front-line scorer as a first-round pick in 2018 . “As the vets continue to allow us to grow and develop, it flows from there.”