Recovery or separation for Messi as Barcelona face up to change 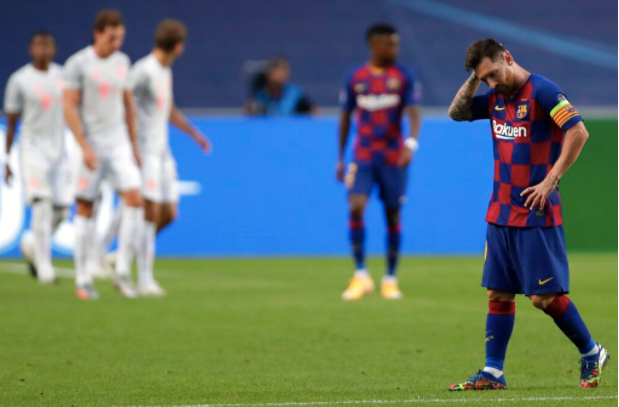 Lionel Messi’s body language said it all as Barcelona were sent into full-blown meltdown in their historic Champions League quarter-final humiliation at the hands of Bayern Munich on Friday.

He could only look on helplessly as the club to which he has brought so much glory succumbed to a record 8-2 defeat in Lisbon.

By the end, even with the ball he could not make anything happen — he was robbed of possession in his own half to start the move which brought Bayern’s seventh goal at the Estadio da Luz.

Earlier, in a photo taken through the door of what appears to be Barca’s changing room at half-time and which has widely circulated online, Messi can be seen sitting alone at the end of his bench, turned away, wearing both the captain’s armband and a look of total resignation.

He looked beaten as he stared at the floor with his shoulders drooping, deflated, done, exhausted, perhaps even, old.

Bayern were 4-1 up at that point, but there was no chance of a comeback in the second half and instead it became Barcelona’s worst ever defeat in Europe.

The hope had been that Messi would erase all logic by beating arguably the most formidable club team in the world right now on his own, and in spite of everything around him.

How did it come to this? And more pressingly, what now? At 33, Messi has to decide if he wants to be part of the overhaul that is surely now unavoidable at the Camp Nou.

“No-one is essential,” said Gerard Pique, one of the last survivors along with Messi of Barcelona’s glorious era under Pep Guardiola a decade ago.

“New blood has to come in and change this dynamic. If I am the first to go, so be it because now we have reached rock bottom.”

Pique, Luis Suarez, Sergio Busquets, Jordi Alba and Arturo Vidal are all 31 or over, but if there is to be a purge of the old guard, Messi would survive it.

Yet it is not clear who would replace them given Barca’s financial problems mean this is not a recovery that can be driven by a string of new signings.

Instead, a new coach, assuming Quique Setien is replaced, would have to turn to the academy, where Barcelona’s creation of young talent is not as efficient as it once was.

Frenkie de Jong, Ansu Fati and Riqui Puig could lead the way but others will need patience, time to bed in, perhaps even a transition season or two.

It is the kind of job that might suit Mauricio Pochettino — a coach who is on the market — even if he thought he had left behind the days of precious few signings and an emphasis on bringing through youth.

Trophies during that period would prove harder, not easier, to come by. Is Messi prepared to spend the final years of his career as a mentor rather than a winner?

The alternative would be to keep faith with the senior players, many of whom might prove impossible to shift anyway, given their expensive contracts in the current market, badly impacted by the coronavirus pandemic.

But that would amount to continuity not change and perhaps only one candidate could persuade Messi that this current crop can be rejuvenated.

The problem is Xavi Hernandez, a club legend as a player, has just signed a new contract with Al-Sadd in Qatar and he will not work under the present board.

It means no option is without risk for Messi, whose silence after the game on Friday suggested he needs time to reflect.

Leaving might still be the riskiest option of all, given nobody can offer guaranteed success in the Champions League, particularly in the short period Messi would be operating.

A new country and culture would bring considerable upheaval for his wife and three young sons.

A new team would also dim, if only slightly, his star at Barcelona, the club he joined almost two decades ago and is now undeniably failing him.