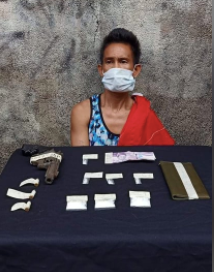 At least P115,000 worth of suspected shabu and a .38 caliber revolver are confiscated from Joemarie Sarausad, whom police described as a most wanted drug personality in the region. | CCPO photo

CEBU CITY, Philippines — Five men were arrested after they were caught with illegal drugs in separate operations in Consolacion and Cebu City today, August 29, 2020.

Cebu City policemen bagged the biggest drug haul for the day after they arrested Joemarie Sarausad, 32, who was caught with 17 grams of suspected shabu during a buy-bust operation at 2:05 p.m. in Sitio Omega, Barangay Pahina Central, Cebu City.

The confiscated suspected drugs had an estimated Dangerous Drugs Board value of P115,600.

A .38 caliber revolver was also confiscated from Sarausad during the operation.

Police Major Randy Caballes, head of the intelligence unit of the Cebu City Police Office (CCPO), said that Sarausad was also considered as one of the most wanted drug personality in Central Visayas.

Caballes said that they had monitored Sarausad’s illegal activities for two weeks before conducting the buy-bust operation.

He also said that Sarausad was allegedly a pusher who could dispose from 100 grams to 200 grams of suspected shabu in a week with his downtown Cebu City areas as his distribution spots.

Caballes also said that upon further investigation they found out to have been in and out of prison.

Sarausad was detained at the CCPO detention cell pending the filing of selling illegal drugs and illegal possession of firearm.

Earlier in the day, Consolacion policemen also arrested four men, who were caught with .19 grams of suspected shabu at a quarantine control point in the town at 12:30 a.m.

Police Major Verniño Noserale, Consolacion Police Station chief, said the two motorcycles each with a driver and a back rider were flagged down at a checkpoint in Barangay Poblacion Oriental.

They were arrested after .19 grams of suspected shabu was found in their possession.

Noserale said that they received reports about four men entering the town at about that time having illegal drugs.

He said he alerted those at the checkpoint about this, which led to the interception of the men.

Noserale said he had yet to give the names of those arrested because they were still verifying their names if these were indeed their names.

The four men were detained at the Consolacion Police Station detention cell pending the filing of possession of illegal drugs and violation of social distancing rules./dbs