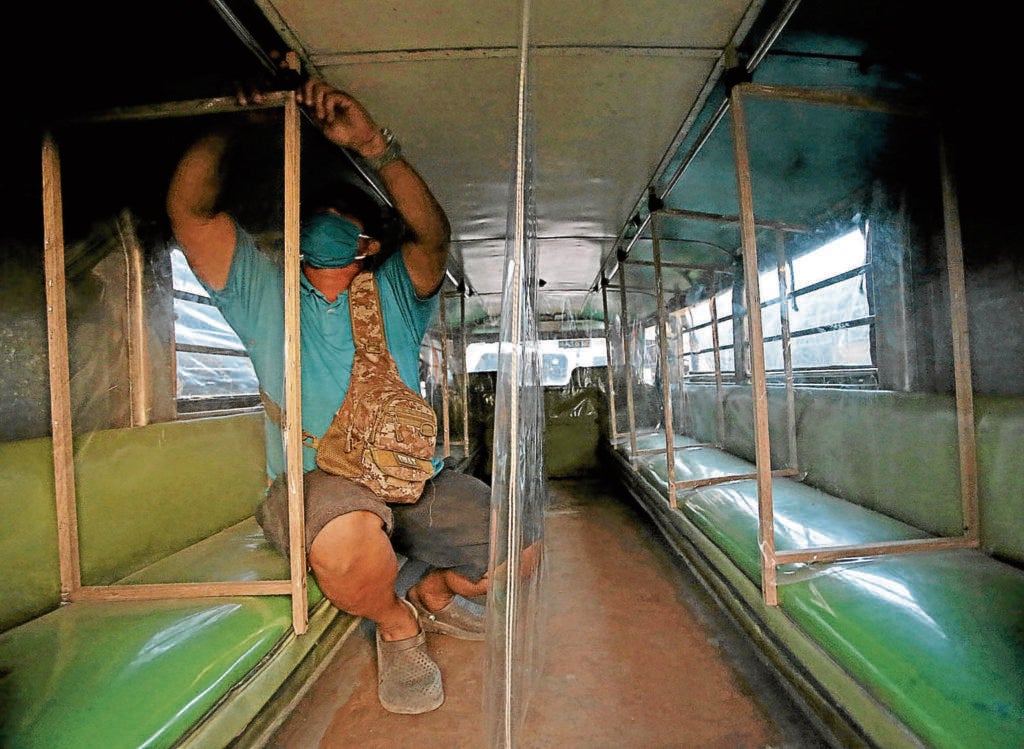 A jeepney driver installs wood and plastic partitions to comply with physical distancing measures in the public vehicle once hailed as the King of the Road. | Inquirer photo

CEBU CITY, Philippines — The Cebu City government will be requesting transportation officials to allow traditional jeepneys to operate again in the city.

Lawyer Rey Gealon, Cebu City government’s spokesperson, announced in a press conference on Friday, September 4, that they would be sending a ‘clarificatory communication’ addressed to the Land Transportation Franchising and Regulatory Board in Central Visayas (LTFRB-7).

Gealon said the letter would ask for a clarification from LTFRB-7 on why no traditional public utility jeepneys (PUJs) were allowed to run again in the cities of Cebu and Mandaue now that both localities had been downgraded to the most relaxed form of community quarantine.

“The city government will be submitting a clarificatory communication to the regional office of LTFRB on this concern. In fact, we are already drafting the letter,” said Gealon in Cebuano.

The city’s spokesperson and legal officer said Mayor Edgardo Labella was inclined to have traditional PUJs back on the roads.

“Among the factors our mayor pointed out were that passenger jeepneys can provide big help to our riding public, and they are means of livelihood for our drivers and operators themselves,” Gealon said.

It can be recalled that LTFRB – 7, on Thursday, September 3, announced through a memorandum that traditional jeepneys with routes in the cities of Cebu and Mandaue were not yet allowed to operate.

READ MORE: Jeepneys back in Cebu Island except for Cebu City, Mandaue City

This developed after the Inter-Agency Task Force for the Management of Emerging Infectious Diseases (IATF-MEID) granted the cities of Cebu, Mandaue, Lapu-Lapu, Talisay, and the towns of Consolacion and Minglanilla with MGCQ statuses.

Under MGCQ, traditional jeepneys are allowed to return on the roads. /dbs