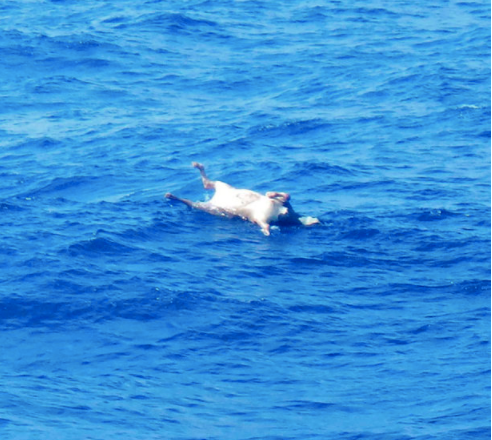 TOKYO — Japanese rescuers found the second crew member and multiple dead cows Friday in waters where a ship carrying thousands of cows from New Zealand capsized and is believed to have sunk during stormy weather, coast guard officials said.

The man was found unconscious and floating face down about 120 kilometers (75 miles) northwest of Amami Oshima island in the East China Sea, where rescuers have been looking for the Gulf Livestock 1 ship and its missing crew since it sent a distress signal early Wednesday.

The man, whose nationality and crew status is unknown, was taken to a hospital but later pronounced dead, said Takahiro Yamada, a senior spokesman for the regional coast guard headquarters. He said rescuers also spotted dozens of cow carcasses floating in the area. So far, he said he was not aware of reports of carcasses washing ashore the Japanese coast.

New Zealand officials said Friday they were temporarily suspending any new approvals for the export of live cows following the incident. The Ministry for Primary Industries said in a statement it “wants to understand what happened on the sailing of the Gulf Livestock 1.”

Coast guard video shows rescuers carefully maneuvering their boat in choppy waters to safely pluck Sareno out of the water. He told them the ship stalled when an engine stopped, then capsized after being hit by a powerful broadside wave and sank. 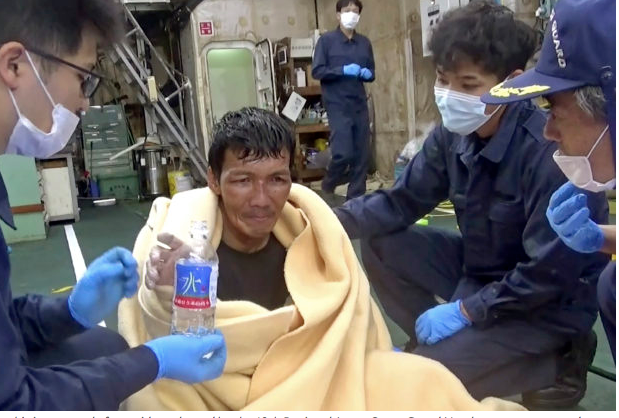 Officials quoted Sareno as saying that he put on a life jacket and jumped into the sea, and that he has not seen any other crew members since then.

“Thank you, thank you very much,” Sareno told rescuers as he was escorted onto a bigger ship, where he sat on a blue tarp, wrapped in blankets, and taking a bottle of water. “I’m the only one? No other one?” he asked the rescuers, then added, “I’m so sorry … (I’m) so lucky.”

The total crew included 39 from the Philippines, two from New Zealand, and two from Australia.

Rescuers in four boats, an aircraft as well as divers joined Friday’s search operations. A bundle of orange rope and a life jacket carrying the ship’s name were also recovered, according to a coast guard statement.

Typhoon Maysak was blowing by southern Japan at the time of the sinking. The ship’s automated tracker showed it sailing in high winds of 58 knots (66 miles or 107 kilometers per hour) at its last known position, according to the ship-tracking website MarineTraffic.com.

“Our hearts go out to those on board and their families at this time. We also express deep regret for the sad loss of the livestock on board,” the ship’s operator, Dubai-based Gulf Navigation Holdings PJSC, said in a statement. “We pray that there are other survivors.”

The company, traded on the Dubai Financial Market, says it owns and operates chemical tankers, livestock vessels, and other ships.

Another powerful typhoon is approaching southern Japan over the weekend.