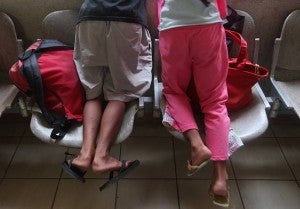 What are local school girls doing in the company of an Australian tourist in a beach resort? A 15-year-old girl said she met her “friend” through Facebook. (CDN PHOTO/ TONEE DESPOJO)

It was a school day but about 20 girls were having fun in a resort in Cordova town, courtesy of a 50-year-old Australian engineer.

Ana (not her real name), 15, her 12-year-old sister and 12-year-old cousin found themselves at the Cordova Home Village, a resort frequented by foreigners in barangay Buagsong, the whole day yesterday.

She said she was invited by Peter James Robinson, an Australian whom she first met  on the Internet when he added her as a friend on Facebook.

Yesterday was the first time they met face to face.

Police arrested Robinson yesterday and are preparing charges of violation of the child abuse law.

One of the law’s provision penalizes anyone in the  company of minors,   with whom they have no blood ties or legitimate relationship, in  tourist establishments and public places.

Robinson checked into the resort over the weekend and brought in  the children as guests.

A joint rescue operation was mounted yesterday afternoon by the Department of Social Welfare and Development (DSWD) and the Children’s Legal Bureau (CLB) which alerted the police.

CLB lawyer Vincent Isles said the children were in  Robinson’s custody since Saturday.

Closer interviews will be made to determine if the girls had been abused.  In the meantime, the children were  placed in the care of a DSWD center.

Robinson, a mechanical engineer, was detained at the Cordova Police Station.

At least three mothers were also brought to the police station for questioning.

Charges for violation of Republic Act 7610 or the Special Protection Against Child Abuse, Exploitation, and Discrimination Act, Republic Act 9775 or the Anti-Child Pornography Act of 2009, and rape may be filed against Robinson depending on testimonies of witnesses and the children, Isles said.

“The victims were seen inside the suspect’s room. That alone is a violation of the Anti-Child Abuse Law. he told reporters.

Republic Act 7610 prohibits any “any person to keep or have in his company a minor, 12 years or under or who in 10 years or more his junior in any public or private place, hotel, motel, beer joint, discotheque, cabaret, pension house, sauna or massage parlor, beach and/or other tourist resort or similar places.”

He said one of the girls whom Robinson brought to Manila sought the help of the DSWD.  The agency then  coordinated with the CLB and the police in arresting the suspect. 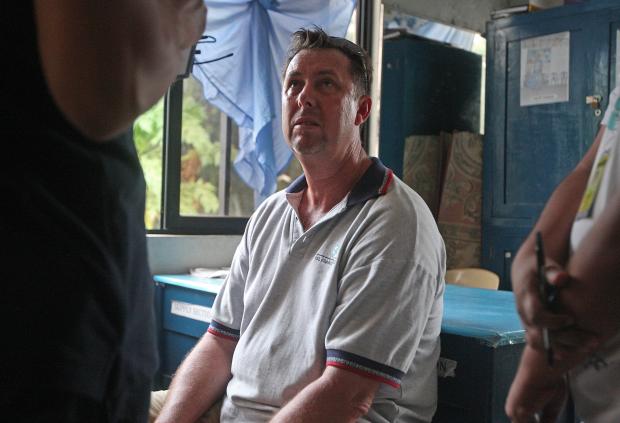 “I don’t know what’s happening. Someone filed a complaint against me. But the police told me nothing. I’m very surprised. Maybe, someone is jealous,” he told reporters.

Robinson said he has been residing in Manila for two years and has  visited  Cebu four times for vacations.

“I come to Cebu to swim, drink, eat, etc. This is the first time I’ve been  arrested. I’m confused. I felt outnumbered because I’m a foreigner,” he said.

Ana, whom Robinson allegedly kept in his room, at first told CDN that she doesn’t know the man.

FB friend
Later on, she admitted that she met Robinson on the Internet when he  added her as friend in Facebook last March.

Ana said his Facebook name was  “Rob Jackson” and that they would often chat with each other.

Yesterday, she said she, her sister, and cousin met with Robinson for the first time at the Cordova Home Village where they ordered seafood for lunch.

At one point during the interview, Ana saw Robinson at the second floor of the police station and enthusiastically called out,  “Psst, Rob!”

Ana’s elderly mother said she had no idea about her  daughter’s encounter with Robinson.

The mother, who works as a maid in Cordova, protested that Ana should not have been taken away by the DSWD since her daughter was not abused by Robinson.

She denied reports that her daughters were with the foreigner since last Saturday.

But when asked by the CLB lawyer if she’s willing to testify about that, the mother became silent.

Read Next
No fare hike