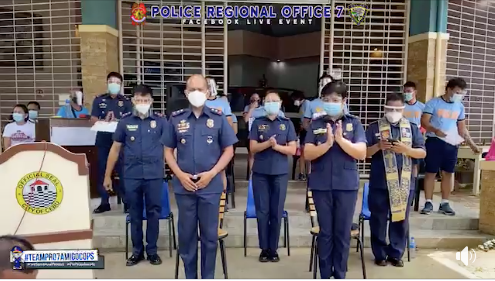 A screenshot of the live graduation ceremony at CREMDEC on Wednesday, September 9, 2020.

This was announced by PRO-7 regional director Police Brigadier General Albert Ignatius Ferro during the graduation or reintegration ceremony on Wednesday morning at the Cebu City Resource Management and Development Center (CREMDEC) in barangay Taptap, here.

The last batch of recoveries was composed of 11 cops from the PRO-7 force.

Ferro, during his virtual speech, said miracles do happen.

“Today we are again witnessing a promising development in our midst.. A miracle,” he said.

Ferro thanked all the medical workers in the office and all the personnel who took care of the infected police officers.

Just like before, Ferro again encouraged recovered police officers to become plasma donors to help those battling the virus in the different hospitals in the region.

“We will not lower our guards down. We will still be vigilant and we will still continue the advocacy of the I5,” he added.

I5 stands for inform, identify, isolation, intervention and integration. This campaign was meant to support the “test, trace, treat” or T3 policy of the government.

Ferro was supposed to be reassigned to Southern Luzon, where he will sit as the Directorate for Integrated Police Operation. An order for his transfer was released on Tuesday, September, 8.

But in an interview Wednesday morning, Ferro said  he got a call from Philippine National Police (PNP) chief General Camilo Pancratius Cascolan on Tuesday night, telling him he will remain as Central Visayas police chief  “until further notice.”

Read: Ferro to remain as PRO-7 chief ‘until further notice’

Supposedly taking over Ferro’s  position as PRO-7 chief is Police Brigadier General Jonnel Estomo, a former member of the Anti-kidnapping Group of the police. /bmjo