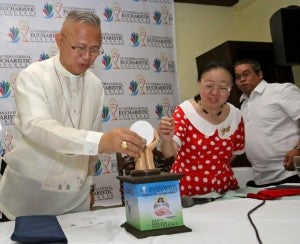 The nationwide “piso-piso” fund-raising campaign for the 2016 International Eucharistic Congress (IEC) in Cebu City has extended its reach.

After it was launched in all parishes and Catholic schools across the country, the campaign dubbed,  “Piso Para sa Misa ng Mundo” (PPMM) will be introduced in malls, department stores and in some churches abroad.

“We, particularly in Cebu, feel doubly blessed and privileged to host the 51st IEC. This is an event of a lifetime. I often say that this is a gift. But this poses a task as well. We may not be as rich as other countries, but we are rich in faith,” said Cebu Archbishop Jose Palma in a press conference at the Archbishop’s Residence in Cebu City yesterday.

Fr. Charles Jayme, chairman of PPMM, said they will give updates of the amount collected.

“We have to be highly transparent because this is the people’s money. Everything has to undergo audit,” he told reporters.

He said donations shall be collected by parish priests and school administrators and will be remitted to the Economic Affairs Office of the dioceses and archdioceses.

Acknowledgment receipts shall be issued to the parish priests and school administrators.

The donations shall then be remitted to the Metrobank branch in Intramuros, Manila before it will be forwarded to the IEC main account.

“The PPMM is a national campaign to raise funds for the IEC. No matter how small your contribution will be, to us, it’s already a great gift,” said Jayme. He and Elvira Go, IEC promotions and publicity chairperson, have been visiting  churches nationwide to help people understand about the PPMM.

It is not yet certain  if Pope Francis will visit Cebu for the  51st IEC in 2016. The pope has only  confirmed his visit to the Philippines on January 15, 2015.

“We should be thankful that he’s coming over (although not for the IEC for now). Who knows, he may  come back. One thing is certain, he loves us Filipinos,” Palma said. /Le-an Lacaba, UPV Tacloban Intern