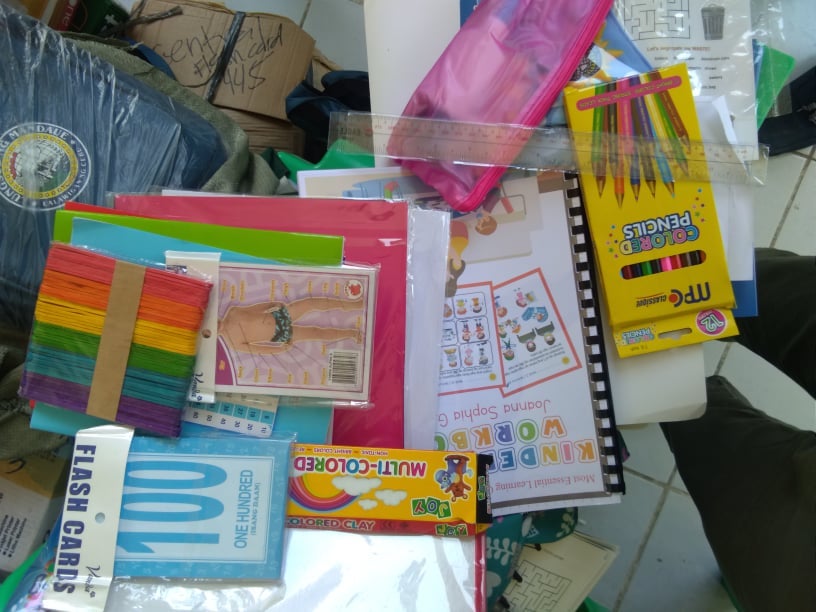 Kindergarten pupils in Mandaue City are set to receive these schools supplies from the city on Thursday and Friday. | Mary Rose Sagarino

CEBU CITY, Philippines – Close to two million students, who are enrolled in public schools in Central Visayas, are expected to go back to their classes tomorrow, Monday (October 5) as the first day for the school year 2020 to 2021 will begin.

The Department of Education in Central Visayas (DepEd-7) reported that due to the effects of the coronavirus crisis, more students had enrolled in public schools, and the number of enrollees in private schools had significantly dropped.

Salustiano Jimenez, DepEd-7 director, told CDN Digital in a phone interview that their department, as of September 30, 2020, had reported a 110 percent achievement rate in their target number of enrollees in public school.

“We have achieved 110 percent in our target number for enrollees in public schools in all levels,” said Jimenez in a phone interview with CDN Digital.

DepEd-7 aims to have 1.7 million enrollees for the current academic year.

This meant that as of September 30, students enrolled in public schools all over Central Visayas had already reached approximately 1.9 million.

Central Visayas has a total of around 2.1 million students in elementary and high school enrolled as of the last day of September. However, only a fraction of this number was enrolled in privately owned schools.

Jimenez said there were only 182,000 students, both in elementary and high school, who would continue their education in private schools.

The number was only 59 percent shy from their target for this year, and it was lower compared to the figures posted last year, he said.

“Although our enrollment in private schools has surpassed the national average, which is below 59 percent,” added Jimenez.

DepEd-7 is targeting to have 300,000 students enrolled in private schools for this school year.

But Jimenez said they were expecting the number of students enrolled in both public and private schools to increase as the days progress.

“This is because enrollment, in public and private schools, will continue until the first week of November,” said Jimenez.

“We’re expecting an increase in the number of enrollees, and we’re hoping we can reach the target number of students for our private schools,” he added.

Due to the threats of the coronavirus disease 2019 (COVID-19) pandemic, DepEd has prohibited face-to-face classes.

As a result, they introduced a mix of various channels where both teachers and students could still exchange knowledge and continue their learning from the confines of their own homes.

These included modular distance learning, online classes, broadcast-aided instructions, and blended learning, which is a combination of these modalities.

Jimenez said majority of schools in Cebu opted to do modular distance learning, most of whom cited inaccessibility to internet connection in areas where they belonged.

Nevertheless, the DepEd-7 top official said that all public schools in Cebu were prepared to greet the first day of classes.

“We have been monitoring and visiting schools all throughout Cebu for the past couple of weeks. We personally checked their readiness. And we observed that they are indeed ready for the opening,” he said in a mix of English and Cebuano.

On the other hand, the DepEd-7 top official said the number of schools used as isolation centers and quarantine facilities in Cebu had been greatly reduced.

“It was recently agreed that in every town or municipality, there will be only one school designated as a quarantine facility. So if we have 48 towns in Cebu, it’s safe to say we now only have around 48 schools still being used isolation centers,” said Jimenez.

When the outbreak peaked within May and July, Jimenez said there were more than 700 schools in Cebu alone used as quarantine facilities to house suspected and asymptomatic COVID-19 patients.

Teachers belonging to schools that were still being used to house individuals believed to have SARS-CoV-2, the virus that caused COVID-19, would be referred to other schools, he said.

“While those that were previously used, and now will be used again, have been issued with certificates from DepEd, DOH (Department of Health) and the LGU (local government unit) as proof that these have been extensively disinfected, and safe for occupation,” added Jimenez. /dbs